Home » History » The Beginning of Tea; From the Ancient World to Lu Yu

The Beginning of Tea; From the Ancient World to Lu Yu

Tea is a Treasure of the World – Before Tea Literature

As a consciousness-altering agent it is mankind’s kindliest ally in the vegetable kingdom. “If you are cold tea will warm you; if you are heated it will cool you; if you are depressed it will cheer you; if you are excited it will calm you” as an Englishman famously claimed, echoing sentiments long held in Asia. There, tea drinking is as old as the pyramids of Egypt, if we are to trust the Chinese legend that attributes its discovery to the Emperor Shen Nong circa 2700 BCE.

Historically speaking, tea from Yunnan is mentioned as a commodity sent as tribute to the Emperor in the year 1066 BCE. Yunnan is thought to be the original home of the species Camellia sinensis, which probably spread from there to neighboring Assam, Burma, Laos and south China. How else explain the fact that 260 of the world’s 380 varieties of tea may be found there or the nu­merous wild tea trees? One wild tree there is now over seventeen hundred years old, while the oldest cultivated tea tree-actually, the oldest cultivated plant!-is over eight hundred. Yunnan has many ethnic groups who practice many different ways of prepar­ing and using tea, but they all seem to honor an ancient hero named Zhuge Liang as the pioneer tea lover.

Tea was first known as tu, for instance, in a book which describes how the Zhou dynasty (794-221 BCE) used tea in religious rituals for communion with divinities. The distinctive ideogram cha-exactly like the character tu but for the omission of a single stroke-first appears in the Chinese written language in AD 725. The name tu survived in the coastal dialect from which Europeans were later to derive the word “tea,” however.

Regardless of how it was written, tea was well-known and widely available in China long before the time of Christ. By the last days of the Roman Empire, even barbarians from beyond China’s Great Wall craved tea enough to barter horses for it. And in the late 700s during Europe’s Dark Ages, China, in the high noon of her cul­ture and might, had just recognized a man named Lu Yu, the author of the first book about tea, Ch’a Ching, as patron saint of tea.

The effect of tea is cooling and as a beverage it
is most suitable. It is especially fitting for persons
of self-restraint and inner worth.

The Victorian art critic John Ruskin once said, “to see a thing and tell it in plain words is the greatest thing a soul can do “-and that’s exactly what Lu Yu did. Lu Yu, if his biographers are to be believed, was an orphan raised by Buddhist monks. As an adolescent, he rebelled (as who does not?) against the pieties and practices of his received religion. One imagines that the long periods of sitting meditation got to him. Whatever the case, he fled from holiness and the prospects of enlightenment to enter show business, so to speak, as a comic and clown. He was a success, it is said, but still dissatisfied-he yearned for an educa­tion

At about this point, an influential fan became his patron and enabled Lu Yu to make a scholar of himself, only to find him fired with a further ambition: he wanted to make a lasting contribution of his own to learning (as, again, who wouldn’t?). Somehow Lu Yu wangled a contract for a book on tea. The tea interests wanted their haphazard methods of cultivation and production codified, compared, and analyzed in a clearly understandable report. Like the author of Confessions of an English Opium-Eater, Lu Yu saw it as the chance of a lifetime. He went into five years of hermit-­hood and came out with the Ch’a Ching-the world’s first “book of tea.” In its own field, the Ch’ a Ching was right away ranked alongside the I Ching, the “cyclopedia,” “scripture,” or “classic” of changes, for ching means more than” book.”

The Classic of Tea 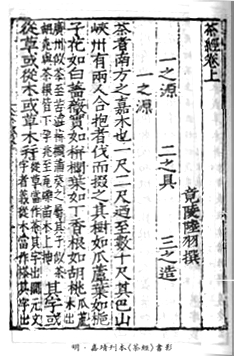 “The tea plant is a beautiful as well as beneficial tree of the southern regions,” is how the Ch’a Ching begins. It is a work which only an author personally familiar with every aspect of tea growing and manufacture could have written, as witness its contents:

Although full of the most practical detail, Lu Yu’s work reads like more than just a technical manual. The manufacturing of tea bricks, which were steamed and then dried for storage, is summa­rized: “All there is to making tea is to pick it, steam it, pound it, shape it, dry it, tie it, and seal it.” His language is literary through­out, even spiritual. In stressing tea’s medicinal efficacy, he says “Its liquor is like the sweetest dew of heaven”-a Buddhist term. Plainly, he is not advocating tea simply for medical benefits-to prepare he insists on the quasi-ceremonial use of twenty-four separate implements! He ranks existing tea districts and lists fa­mous tea drinkers along with the unlikeliest legends and obses­sively over-precise directions covering everything relating to tea.

His classical Chinese is condensed and hard to decipher. The fa­mous comment “Goodness is a decision for the mouth to make,” may also be translated “Discrimination of good (and bad) tea is a matter for (secret) oral transmission.” Lu Yu’s intention in all this only gradually becomes clear: to draw the reader directly into the life that tea drinking can open to us. This simple beverage is not just to slake our thirst and delight our palate but to bear us away to a realm that transcends the senses.

The Ch’a Ching made Lu Yu a celebrity in his own lifetime. Tea merchants had porcelain statues made of him to which they prayed that the tea crops might be large and sell well. And when business was bad, they would sometimes pour a kettleful of boiling water over the un offending image. Lu Yu was revered by the intelligentsia of his day and after, as the numerous poems and sto­ries about him attest.

One of these tells how Zhiji, the Chan (Zen) Buddhist priest who had raised Lu Yu, would never drink tea made by anybody else’s hand. Even at court, the priest declined the tea offered him. Thinking that Zhiji was just putting on airs and playing the connoisseur, the emperor finally arranged for Lu Yu to prepare tea for the unsuspecting priest. Saying, “Now this tastes like Lu Yu’s tea!”, the old man drank it with pleasure. In the end Lu Yu wound up withdrawing from this world and going off to drink tea and meditate the way the Buddhists always told him he should.

Updated from the original September 2006 publication.

A Thousand mountains will greet my departing friend,
When the spring teas blossom again.
With such breadth and wisdom,
Serenely picking tea—
Through morning mists
Or crimson evening clouds—
His solitary journey is my envy.
We rendezvous at a remote mountain temple,
Where we enjoy tea by a clear pebble fountain.
In that silent night,
Lit only by candlelight,
I struck a marble bell—
Its chime carrying me
A hidden man
Deep into thoughts of ages past.