March 17th is celebrated as St. Patrick’s Day, celebrating the patron saint of Ireland. But an Irish Tea Party can also celebrate other cultural traditions. In addition to the familiar shamrock decorations, an Irish Tea Party celebrates one of the most tea-consuming cultures around the world. Ireland is currently the second-most tea consuming country per capita in the world. This is more than four pounds of tea per person. To compare with tea-drinking in the U.S., we are 35th, consuming an average of less than a half pound per person. When we consider tea as a meaningful component of a healthy lifestyle, sharing some of the tea traditions around the world connects us with the fun of teatime.

One of the first decisions about your Irish Tea Party is the tea you will serve. While you might be tempted to serve a green tea to be in keeping with the color scheme, it would be more traditionally Irish to serve some of the most popular and legendary brands. The most popular brand tends to be Barry’s. It’s an Irish tea company founded in 1901 by James J. Barry.

Our time was spent in wonderful West Cork (Corcaigh) County – at the southern tip of the Island. There is a of competition coming from the big city of Dublin, so you feel a lot of pride for local Cork products. Lyons (from Dublin) is the biggest brand of tea in Ireland, so in Cork, there’s a good pull for the local big brand – Barry’s.  In the supermarket of our local Fair Trade town, there’s a third brand – Barber’s Daily, also from Cork.  I pulled some locals into a tasting I did of all three teas.  Although they’re all the same type of blend – Assam from India and China black and / or Kenyan tea – they have remarkably different flavor profiles.

Maria Uspenski, “Tea in Ireland was a Corker”

Elizabeth Knight offers a year’s worth of Celtic-themed tea parties in her book, “Celtic Tea With Friends.” She provides history of St. Patrick, suggetions fr decorations, entertainment and activities. And she includes menu suggestions and recipes. Her scones are based on the traditional Irish Soda Bread and her tea sandwiches feature beef and salmon. She explains many of the legends; “Druids decided that four-leaved versions (of clover) were lucky. ‘Tis said that unmarried women who find and eat these clovers will soon meet their husbands.”

But they also share suggestions for elegant tablescapes with examples of decorative china and place settings.

Who Was St. Patrick?

In 400 AD, young boy, Maewyn Succat, was kidnapped from Brtitain and held in slavery on a sheep farm in Northern Ireland. Even though he escaped, he returned as a missionary and took the name Patrick. There are many legends about his life like chasing the snakes out of Ireland and turning a walking stick back into a living tree. But he is often credited with using the example of the three-leaved clover to explain the holy trinity. (More on Wikipedia) Even though the dates of his life may not be historically accurate, March 17 is the day celebrated to honor his death. 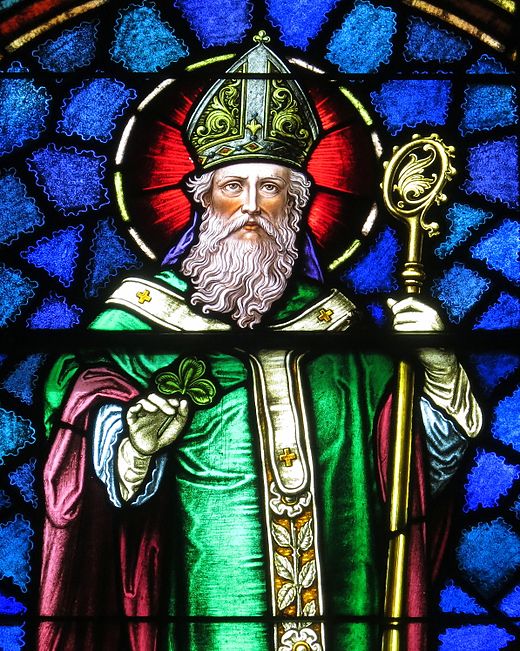 While celebrating St. Patrick’s Day may be limited to March 17th, hosting an Irish or Celtic tea party can happen any day! Though similar in many ways to British teatime, the Irish traditions, favorite teas and foods are warm and welcoming for any afternoon teatime.

Tea Party in Your Cupboard