How to Celebrate Indigenous People’s Day with Tea

Did you wake up asking yourself how to celebrate the first official Native American holiday? We woke up wondering how we could celebrate indigenous people’s day with tea. We’d like to offer a few suggestions and then invite you to share some of your creative ideas.

Today marks the first time a U.S. president has officially recognized this date as Indigenous People’s Day. For the past 30 years, there has been a movement to recognize Native American people by either replacing or sharing the second Monday in October with Columbus Day. These decisions have been made state-by-state. This year, President Biden signed a federal proclamation as the first U.S. president to recognize the day.

Today, we recognize Indigenous peoples’ resilience and strength as well as the immeasurable positive impact that they have made on every aspect of American society. We also recommit to supporting a new, brighter future of promise and equity for Tribal Nations — a future grounded in Tribal sovereignty and respect for the human rights of Indigenous people in the Americas and around the world.

It was South Dakota, home to many different tribes of the Sioux Nation, where this day was probably first celebrated in 1990. Since then, the celebrations in states with large Native American populations, have grown.

But how should we celebrate – especially if we do not share the heritage genetically?

As much as we debate whether or not there is a tea culture in the U.S. and if that culture should be limited to C. sinensis or expanded, to include indigenous cultures, archeological discoveries like this pottery beakers dating from 1050 to 1250 CE may challenge our discussions.

The surfaces of the unfired vessels was incised with motifs representing water and the underworld and resemble the whelk shells known to have been used for the consumption of the beverage during historic times. The inside of the vessels were found to be coated with a plant residue, which when tested was found to contain theobromine, caffeine and ursolic acid in the right proportions to have come from the Ilex vomitoria.   Wikipedia, Black Drink

Just to be clear, we’re not recommending that you merge a traditional afternoon tea with scones and one of the indigenous herbal teas. Rather, use this celebration to discover something you didn’t know before and then share the experience with a friend.

One of the native plants used both medicinally and ceremonially by tribes in North America was the Yaupon (Ilex vomitoria). This is a member of the holly family and is the only native plant that contains caffeine. It was – and is – considered to be one of the sacred herbs, used in a ceremony that also included fasting, drinking the brew, chanting and then purging. Warrior tribes brewed a tea that was referred to as the Black Drink. The ceremonial tea was most commonly consumed by men – perhaps preparing for battle. They often prepared it as well. Some historical accounts mention preparation and usage by women but we have very little recorded evidence. 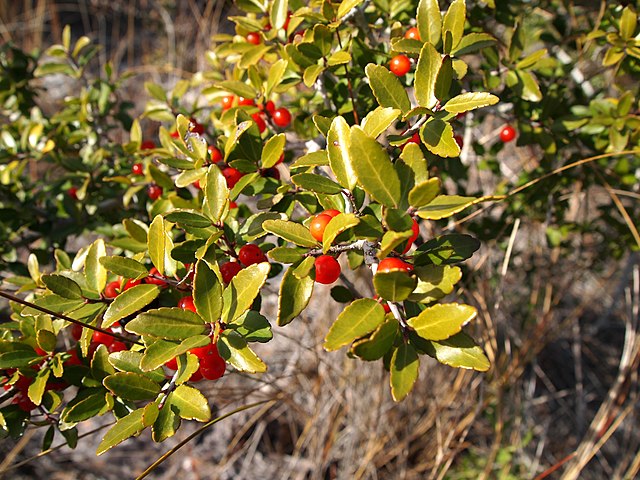 One more thing about Yaupon; it was sometimes referred to ash Liberty Tea used to replace Camellia Sinensis and the caffeine stimulation after  C. Sinensis was banned following the Boston Tea Party. But it was only one of many herbs that Native Americans used for nutrition, for ceremonial activities and medicinally and also for pleasure. While yaupon has become more familiar on some tea shop menus, you might want to visit the website of one of the companies specializing in it.  Catspring Yaupon in Texas.  Yaupon Tea Company in Georgia.  Yaupon Brothers American Tea Company, Floriday.

With the growing popularity of herbalism, there are several books that focus on the indigneous Native American tea traditions. One of the most complete is by Daniel E. Moerman, “Native American Ethnobotany”. If you want to learn a lot more than one thing about these herbs used as teas, you might check this out.

An extraordinary compilation of the plants used by North American native peoples for medicine, food, fiber, dye, and a host of other things. Anthropologist Daniel E. Moerman has devoted 25 years to the task of gathering together the accumulated ethnobotanical knowledge on more than 4000 plants. More than 44,000 uses for these plants by various tribes are documented here. This is undoubtedly the most massive ethnobotanical survey ever undertaken, preserving an enormous store of information for the future.   (Amazon Description)

Try a new tea with roots in Native American heritage.

Many of the herbs that we are coming to know through creative new tea blending had origins in the tea and healing lore of the Native Americans. As herbal teas have become more popular we don’t recognize some of the origins as indigenous herbal healing. One company, Native American Tea, was established in 1987 on the Crow Nation Reservation by a family of the Turtle Mountain Chippewa.

We also found many Native American herbalists on Etsy, selling unblended herbs from various regions and tribes but also vendors who are crafting blends and sharing their herbal expertise.

While the Native American traditions are as ancient as some of the Asian tea cultures, they are new information for most of us. One of the most important things about having a holiday like Indigenous People’s Day delcared is that we can share our understanding of and feelings about these stories in our shared history. They aren’t comfortable stories. The colonization of North America and abusive to native people is difficult to digest. We’ve been trying to heal it and begin to mend some of the injustices for many years. It will, most certainly, take many more.

Could sharing a cup of tea and a story of the people for whom it was a medicine, a food and a ceremony be a tiny step toward better understanding and respect.

In Conclusion: Drinking tea has been and remains one of the most ubiquitous practices in cultures around the world by which we express hospitality, health and spirituality. Sometimes we tea lovers focus more on the actual plant like Camellia sinensis and pay less attention to the way in which the drink is prepared and shared.

Today we can bend a bit more toward the side of celebrating the act of sharing the brewed drink and what it gives to our fshared North American culture.  Perhaps we can find new common ground that can be nourishing and healing as we celebrate Indigenous People’s Day 2021 with tea.

Only in Canada, you say? Pity.