Lu Tong, the Poet Sage of Tea was a respected tea personage of the Tang Dynasty in China. Little is known of his life, (795 – 835 CE) other than that he declined an offer to be a provincial officer, preferring a quiet life and tea. He lived a secluded life somewhere in the mountains of Hunan Province, writing poems under the name “Master Jade Spring.”

His poems clearly demonstrated his understanding that tea had the power to help one live a more natural, complete life. His tea-inspired poetry attracted the attention of some highly placed government officials and Lu Tong nurtured those associations in exchange for the high-quality teas they often offered him. He was sometimes even given some Imperial Tribute Tea, which was priceless and unavailable except when presented from the Dragon Throne.

Once Imperial Censor Meng, bestowed upon Lu Tong a gift of freshly picked tea. Lu Tong considered this to be a generous and lavish gift. It inspired him to compose his most famous poem, The Song of Tea, also known as, The Seven Bowls of Tea. 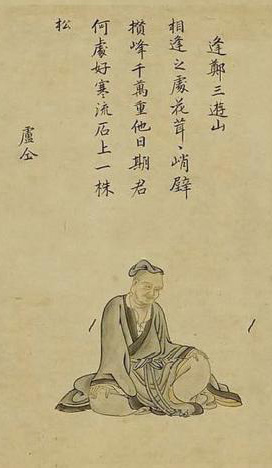 The Seven Bowls of Tea

The first cup caresses my dry lips and throat.

The second shatters the walls of my lonely sadness.

The third searches the dry rivulets of my soul to find the series of five thousand scrolls.

With the fourth the pain of past injustice vanishes through my pores.

The fifth purifies my flesh and bone.

With the sixth I am in touch with the immortals.

The seventh gives such pleasure I can hardly bear.

The fresh wind blows through my wings,

As I make my way to Penglai the mountain of the immortals.

Lu Tong’s poem has been a favorite for centuries because it best expresses the belief that tea is a spiritual balm, a quiet companion in a world of noise.

Unfortunately, Lu Tong lost his life once while visiting the capital. He was inadvertently drawn into the emperors’ plot to remove some officers and soldiers that were manipulating the throne. They ransacked the city and executed numerous administrators, even without convincing evidence.

Regrettably, Lu Tong was visiting the very same official, the Imperial Censor, Meng, who had sent him the tea that had inspired his poem, The Seven Bowls of Tea. The soldiers captured the Meng and his entire household, including Lu Tong. Sadly, years earlier, Lu Tong had authored a satirical poem that mocked some of the court officials and they hadn’t forgotten. He was beheaded and buried in a humble grave; his children orphaned.

Most of his poetry was devoted to tea and the tea ceremony. His passion for tea was perfectly shown from a line in one of his poems:    “I care not a jot for immortal life, but only for the taste of tea.”

Lu Tong’s poetry, art and respect for tea continue to inspire many tea writers and students of tea.

There may not be a colossal gravestone commemorating him, and even much of his poetry has drifted into obscurity, but there hasn’t been a tea lover since his time that hasn’t learned, and often memorized, some of his poems. The above poem captures all of what tea is about: mindfulness, reverence and withdrawal from worldly concerns.

This article is based on an Judi Slack’s blog Post, ABCs of Tea.

Judi Slack is a certified tea specialist, certified tea professional, certified tea sommelier and certified tea health expert by the World Tea Academy. She teaches various tea related courses at Cuyahoga Community College in Cleveland, a provider of education to individuals 55 and older within an academic environment that recognizes their intellectual interests. She additionally teaches at the Institute for Learning in Retirement at Baldwin Wallace University which also offers senior adults the opportunity to continue learning in a non- competitive academic setting. She also provides informative tea education programs for local libraries. Ms. Slack organizes the “No Hats Required“Meetup group, with a current membership of 103. The group has been in existence since 2010 and she has organized more than 360 tea related events for it. Her passionate goal is to educate others on the diverse wonders of tea in general, especially some of the little known but extremely interesting connections to tea.

Ten thousand miles without a cloud

We All Love Tea, We May Just See It Differently