Modern and Contemporary Poetry About Tea

By Chinese Poets – In Translation

A text which remains as poignant as the first time it is sipped is “The Classic of Tea” by Lu Yu. The first manuscript on tea, it was originally released as three scrolls detailing the comprehensive nature of tea: Ideal utensils, water selection, process of boiling, tea set aesthetics/arrangement, and connoisseurship elements. This book, in addition to its formative role in developing literati tea practices, detailed breath-taking extended metaphors of tea through poetic exploration: Notably in its comparison of boiling water to jujube tree flowers, scudding clouds, and drifted snow. In Francis Ross Carpenter’s translation, this image ruminates like a well aged pu’er: “The first cup should have a haunting flavor, strange and lasting.”

And so, it is Lu Yu’s work that enchants, courts, and haunts us today with its resonating truth from 760CE, during the Tang dynasty. While an abundance of ancient Chinese poetry exists to celebrate, commemorate, and ponder over myriad cups of tea; there are also many overt and subtle references to tea existing within modern and contemporary Chinese literature. The term ‘modern China,’ however, is heavily contented among scholars; some claim it is work produced after the establishment of the People’s Republic of China in 1949, others claim it is with the fall of the Qing dynasty in 1911, and others yet will claim it was since the end of the Han ruling during the end of the Ming dynasty in 1644.

Regardless of the school of thought, I am including living poets whose work transcends ancient and avant garde literary schools of thought. The order of the names are kept according to Chinese tradition: Surname, given name. This article is a compilation of excerpts from Chinese poets in translation, who steep emotions through various vessels in connection to tea – be it loneliness within a kettle, a jar brimming with night, homesickness distilled in a cup, or the mundane begrudged in communal tea.

“You bring me a cup of fresh tea that I love，
I return you two kapok leaves—like hand-waves.”

Chen Jun teaches Kun Opera and art history at Beijing University; he is a “post garde minority” writing free verse in antiquity and has published a novel and two poetry collections. (source)

“Tea does not detoxicate,
or purify the mind;
Spring Blossom Tea is kept in a tea-tin,
until it loses all human touch.”

Liu Yali, from Shaanxi, has published poetry, essays, and novels; she has won several national awards for literature. Liu is editor of the literary journal Meiwen based in Xi’an. (source)

Yang Lian is a Swiss-Chinese poet who began writing poetry during the Cultural Revolution as he dug graves; he has published fifteen collections of poetry, writes in other genres, and has served as a board member for PEN International. (source)

“here you are, a Yangtze-River girl.
You can’t leave the water”

Hailing from Hebei, Jing Qiu Feng works as a senior engineer; he has published three collections of poetry among additional anthologies. (source)

Song Lin is a poet from Fujian who has lived in France, Singapore, and Argentina. Song has published five poetry collections, two books of prose, co-edited an anthology, and is the editor of Jintian. (source)

Do you have a favorite poem that mentions tea? Include the poet’s name and the title of the poem below in the comments.

For an example of the author’s poetry, check out Tea Poetry: Rohini Exotic Emperor White

Photo “Chinese Tea House” is copyright under Creative Commons Attribution-NoDerivs 2.0 Generic License to the photographer “llee_wu” and is being posted unaltered (source) 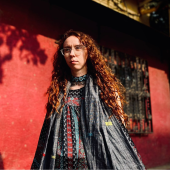 Tea in song (but not where you might think)