Home » Teas of the World » Japan » The Magic Tea Kettle; A Japanese Legend

“Bunbuku Chagama (分福茶釜 or 文福茶釜), literally “Bunbuku tea-kettle“[1] is a Japanese folktale or fairy tale about a raccoon dog, or tanuki, that uses its shapeshifting powers to reward its rescuer for his kindness.” 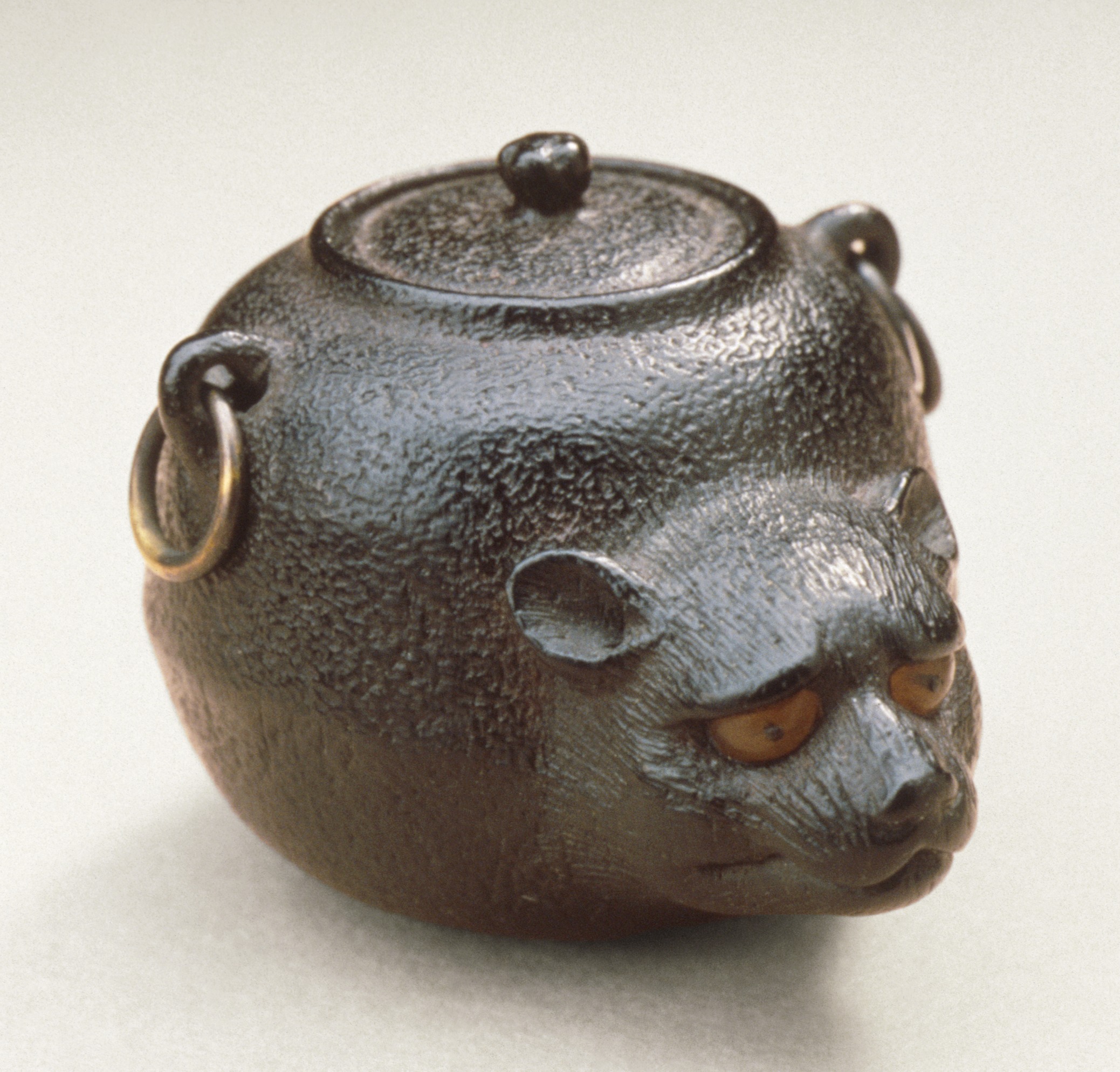 Based on the legend of the Magic Badger Tea Kettle, teaware like this bronze teapot are now hightly sought after by collectors at antique auctions. The value can be assessed between $3000 – $4000 USD.

Read the legend associated with this piece. Enjoy some of the humor in our international tea culture.

Long ago, as I’ve heard tell, there dwelt at the temple of Morinji, in the Province of Kotsuke, a holy priest.

Now there were three things about this reverend man. First, he was wrapped up in meditations and observances and forms and doctrines. He was a great one for the Sacred Sutras, and knew strange and mystical things. Then he had a fine exquisite taste of his own, and nothing pleased him so much as the ancient tea ceremony of the Cha-no-yu; and for the third thing about him, he knew both sides of a copper coin well enough and loved a bargain.

None so pleased as he when he happened upon an ancient tea-kettle, lying rusty and dirty and half-forgotten in a corner of a poor shop in a back street of his town.

“An ugly bit of old metal,” says the holy man to the shopkeeper; “but it will do well enough to boil my humble drop of water of an evening. I’ll give you three rin for it.” This he did and took the kettle home, rejoicing; for it was of bronze, fine work, the very thing for the Cha-no-yu.

[18] A novice cleaned and scoured the tea-kettle, and it came out as pretty as you please. The priest turned it this way and that, and upside down, looked into it, tapped it with his finger-nail. He smiled. “A bargain,” he cried, “a bargain!” and rubbed his hands. He set the kettle upon a box covered over with a purple cloth, and looked at it so long that first he was fain to rub his eyes many times, and then to close them altogether. His head dropped forward and he slept.

And then, believe me, the wonderful thing happened. The tea-kettle moved, though no hand was near it. A hairy head, with two bright eyes, looked out of the spout. The lid jumped up and down. Four brown and hairy paws appeared, and a fine bushy tail. In a minute the kettle was down from the box and going round and round looking at things.

“A very comfortable room, to be sure,” says the tea-kettle.

Pleased enough to find itself so well lodged, it soon began to dance and to caper nimbly and to sing at the top of its voice. Three or four novices were studying in the next room. “The old man is lively,” they said; “only hark to him. What can he be at?” And they laughed in their sleeves.

Heaven’s mercy, the noise that the tea-kettle made! Bang! bang! Thud! thud! thud!

The novices soon stopped laughing. One of them slid aside the kara-kami and peeped through.

“Arah, the devil and all’s in it!” he cried.[19] “Here’s the master’s old tea-kettle turned into a sort of a badger. The gods protect us from witchcraft, or for certain we shall be lost!”

“And I scoured it not an hour since,” said another novice, and he fell to reciting the Holy Sutras on his knees.

A third laughed. “I’m for a nearer view of the hobgoblin,” he said.

So the lot of them left their books in a twinkling, and gave chase to the tea-kettle to catch it. But could they come up with the tea-kettle? Not a bit of it. It danced and it leapt and it flew up into the air. The novices rushed here and there, slipping upon the mats. They grew hot. They grew breathless.

Presently the priest awoke, all rosy, the holy man.

“And what’s the meaning of this racket,” he says, “disturbing me at my holy meditations and all?”

“Master, master,” cry the novices, panting and mopping their brows, “your tea-kettle is bewitched. It was a badger, no less. And the dance it has been giving us, you’d never believe!”

“Stuff and nonsense,” says the priest; “bewitched? Not a bit of it. There it rests on its box, good quiet thing, just where I put it.”

Sure enough, so it did, looking as hard and cold and innocent as you please. There was not a[20] hair of a badger near it. It was the novices that looked foolish.

“A likely story indeed,” says the priest. “I have heard of the pestle that took wings to itself and flew away, parting company with the mortar. That is easily to be understood by any man. But a kettle that turned into a badger—no, no! To your books, my sons, and pray to be preserved from the perils of illusion.”

That very night the holy man filled the kettle with water from the spring and set it on the hibachi to boil for his cup of tea. When the water began to boil—

“Ai! Ai!” the kettle cried; “Ai! Ai! The heat of the Great Hell!” And it lost no time at all, but hopped off the fire as quick as you please.

“The tea-kettle is bewitched,” he gasped; “it was a badger, assuredly it was a badger … it both speaks and leaps about the room.”

“Nay, master,” said a novice, “see where it rests upon its box, good quiet thing.”

And sure enough, so it did.

“Most reverend sir,” said the novice, “let us all pray to be preserved from the perils of illusion.”

The priest sold the tea-kettle to a tinker and got for it twenty copper coins.

[21] “It’s a mighty fine bit of bronze,” says the priest. “Mind, I’m giving it away to you, I’m sure I cannot tell what for.” Ah, he was the one for a bargain! The tinker was a happy man and carried home the kettle. He turned it this way and that, and upside down, and looked into it.

“A pretty piece,” says the tinker; “a very good bargain.” And when he went to bed that night he put the kettle by him, to see it first thing in the morning.

He awoke at midnight and fell to looking at the kettle by the bright light of the moon.

Presently it moved, though there was no hand near it.

“Strange,” said the tinker; but he was a man who took things as they came.

A hairy head, with two bright eyes, looked out of the kettle’s spout. The lid jumped up and down. Four brown and hairy paws appeared, and a fine bushy tail. It came quite close to the tinker and laid a paw upon him.

“I am not wicked,” says the tea-kettle.

“But I like to be well treated. I am a badger tea-kettle.”

“So it seems,” says the tinker.

“At the temple they called me names, and beat me and set me on the fire. I couldn’t stand it, you know.”

“I think I shall settle down with you.”

“Not a bit of it, keep me with you; let us have a talk now and again. I am very fond of a pipe. I like rice to eat, and beans and sweet things.”

“A cup of saké sometimes?” says the tinker.

“Thank you kindly,” says the tea-kettle; “and, as a beginning, would you object to my sharing your bed? The night has turned a little chilly.”

“Not the least in the world,” says the tinker.

The tinker and the tea-kettle became the best of friends. They ate and talked together. The kettle knew a thing or two and was very good company.

One day: “Are you poor?” says the kettle.

“Well, I have a happy thought. For a tea-kettle, I am out-of-the-way—really very accomplished.”

“I believe you,” says the tinker.

“My name is Bumbuku-Chagama; I am the very prince of Badger Tea-Kettles.”

“Your servant, my lord,” says the tinker.

“If you’ll take my advice,” says the tea-kettle, “you’ll carry me round as a show; I really am out-of-the-way, and it’s my opinion you’d make a mint of money.”

“That would be hard work for you, my dear Bumbuku,” says the tinker.

So they did. The tinker bought hangings for a theatre, and he called the show Bumbuku-Chagama. How the people flocked to see the fun! For the wonderful and most accomplished tea-kettle danced and sang, and walked the tight rope as to the manner born. It played such tricks and had such droll ways that the people laughed till their sides ached. It was a treat to see the tea-kettle bow as gracefully as a lord and thank the people for their patience.

The Bumbuku-Chagama was the talk of the country-side, and all the gentry came to see it as well as the commonalty. As for the tinker, he waved a fan and took the money. You may believe that he grew fat and rich. He even went to Court, where the great ladies and the royal princesses made much of the wonderful tea-kettle.

At last the tinker retired from business, and to him the tea-kettle came with tears in its bright eyes.“I’m much afraid it’s time to leave you,” it says.

“Now, don’t say that, Bumbuku, dear,” says the tinker. “We’ll be so happy together now we are rich.”

“I’ve come to the end of my time,” says the tea-kettle. “You’ll not see old Bumbuku any more; henceforth I shall be an ordinary kettle, nothing more or less.”

“Oh, my dear Bumbuku, what shall I do?” cried the poor tinker in tears.

[24] “I think I should like to be given to the temple of Morinji, as a very sacred treasure,” says the tea-kettle.

It never spoke or moved again. So the tinker presented it as a very sacred treasure to the temple, and the half of his wealth with it.

And the tea-kettle was held in wondrous fame for many a long year. Some persons even worshipped it as a saint.

These tales and legends have been collected from many sources. Some of them have been selected from the Ko-ji-ki, or Record of Ancient Matters, which contains the mythology of Japan. Many are told from memory, being relics of childish days, originally heard from the lips of a school-fellow or a nurse. Certain of them, again, form favourite subjects for representation upon the Japanese stage. A number of the stories now gathered together have been translated into English long ere this, and have appeared in this country in one form or another; others are probably new to an English public.

Following the Harvest, First Installment – Highlights of the Tea Tour of Japan 2019 – Part 2