I am always drawn to stories of how the innovations of technology interact in a meaningful way with the ancient world of tea. A computer scientist with a passion for bringing people together to share tea, Vincent Liu created MyTeaPal to help tea lovers organize their daily tea practice and become part of a virtual community.

In 2014, Liu came to the United States for school. His parent had stashed several packets of green tea from his hometown, Chengdu, in his luggage. As he tasted the flavors from his home, they inspired him to learn more about his culture through tea. Returning home for summer vacation two years later, he sought out a tea teacher.

From the one-month training, I learned about the processing and brewing methods for different types of tea, the making and evolution of tea pottery and porcelain, and the history of tea throughout Chinese dynasties. I consider myself fortunate to have gotten to know the profound Chinese tea culture, as only a small percentage of tea drinkers know or have the opportunity to learn the stories behind tea.

Returning to the U.S. and to Duke University where he studied Computer Science, he shared his new tea practice by hosting small gatherings with friends. With their encouragement, it grew into a university tea club, Duke CommuniTEA. One of the events he created was called a Tea Gather which is a group blending party.

I began to search around and, fortunately, found a tea enthusiast from Beijing who’s living near Durham. Together, we hosted three Gongfu tea ceremonies in the first few months of the club’s formation, where dozens of students from different places and cultural backgrounds came together to share the same tea and become friends with each other.

Based on his own needs and his first-hand experience introducing Chinese teas to newcomers, he realized what was needed and was inspired to use his technical expertise to create the app, MyTeaPal.

In just a few months, MyTeaPal has attracted more than 2000 users from several different countries. It provides a dozen different tools for organizing daily tea and also for connecting to the community.

One of the most intriguing is the “Tea Randomizer.” It’s designed to help you through moments of indecision but can also challenge you to get out of a rut and brew something that you haven’t thought of for awhile.

Tea enthusiasts can add their own teas and teaware to their personal collection but also share their brewing experiences with other members of the community via social media.

Liu shares his personal tea journey in one of the apps features, MyTeaPal Stories. App users are invited to submit their own experiences and the meaning of tea in their lives and then the stories are curated, edited, and shared.

While there are a few magazines featuring professionals in the tea industry, there’s no publication that shares stories of tea hobbyists. They may not work in the tea industry, but tea is certainly an integral part of their lives. MyTeaPal Stories exists to provide a platform for these tea enthusiasts to share their experience, spark meaningful discussions, and potentially inspire others. 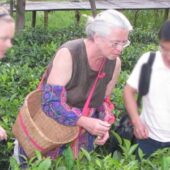