Like most things that scientists get their hands on, they will usually only find a good or a bad. This time around it turns out that it is better than good. In some breakthrough research, scientists have discovered that drinking tea may actually help to lower your risk of Alzheimer’s disease, and drastically for that matter.

The study was put out by the National University of Singapore, and observed more than 950 adults aged 55 years or older. Their tea drinking rituals were cross-checked against their cognitive function, across a total study period of six years. It was noted that those who consumed tea regularly, lowered their risk of neurocognitive disorders by 50 percent, and a massive 86 percent to those who were genetically predisposed to the disease.

The type of tea for the risk of Alzheimer’s did not matter either, pending it was brewed from tea leaves and consumed consistently.

So, how does drinking tea actually impact the brain?
The compounds found in tea are what makes it that little bit special for brain health; catechins and theaflavins to be exact. These ingredients are packed to the brim with antioxidants and anti-inflammatory powers that could assist with anti-aging of the brain.

Researchers back in 2012, discovered that a chemical found in green tea (EGCG), boosts memory function too. When tested on lab mice, scientists discovered that EGCG helped the little guys familiarize objects while improving their spatial memory*

Due to the EGCG in green tea, it also makes the cut for foods known for their cancer-fighting properties too.

Increased memory, better alertness, lower mental fatigue, and an aid in the prevention of cancer, all in one little cup! Just some more reasons to enjoy another cup of tea, right?

We have listed below some of the most beneficial ways to enjoy tea and capitalize on its varying health properties.

Embrace real tea leaves
Tea bags can prove a convenient option, however, you need the actual tea leaves to uncover their real benefits. Try to skip the bags wherever possible and brew your tea direct from the leaves alone.

Keep your brewing time to the recommended level
Particularly important with green tea as the release of tannins, caused by steeping the leaves for too long, can bring about a bitter taste.

Keep it natural
A seemingly healthy drink can turn into a blend of un-natural, sugary mess, depending on what is added. Try to steer away from refined additives, if you need to add anything at all. Manuka honey can be a good option with ample health benefits in its own right. If you are a creamy tea lover, opt for organic, full-fat milk or coconut milk as another option (and dairy-free).

Sometimes, it’s pretty remarkable what the world of science uncovers. This time they may have actually wowed us again. Drinking tea to prevent Alzheimer’s Disease, protecting our brain from aging, and boosting our memory are some pretty cool benefits to add to the list.

Franco Colomba is a content contributor for Bondi Beach Tea and enjoys providing value for others. Franco knows that the best way to receive is to give your best in everything you do. Aside from writing, he has a passion for riding motorcycles & everything adventurous. 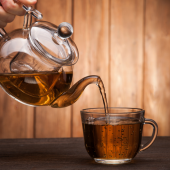 We welcome Guest Contributors who are interested in publishing their research, recipes, and meaningful experiences on T Ching. We do not require that you be previously published but ask that you familiarize yourself with the website and read the Submission Guidelines. You may submit your complete article or send a query in advance to [email protected] summarizing your article.

Is Our Beloved Tea A “Functional Food”?