Blast from the Past: Adding Spice to Our Lives

Chai Iced Tea, Chai Latte, Chai, Chai. The name seems to be in every coffee or tea shop these days. The word Chai is a Hindi word that means funnily enough means tea. The cup of tea with spices that we have come to love and know, is the way many millions of Indians enjoy their cup of tea. Each cup of chai is different and each chai wallah, (tea boy), or company that produces a chai has his/their own secret recipe and take on this famous blend. 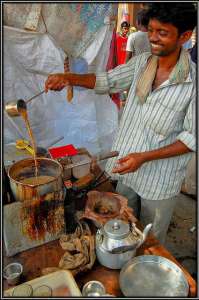 Before Ceylon was known for her tea, early traders came looking for her spices. In fact Sri Lanka produces over 90% of the world’s true Cinnamon – otherwise known as Ceylon Cinnamon. The common variety, known as Cassia Cinnamon, is found growing in China, India, Indonesia, Laos, Malaysia, Taiwan, Thailand, and Vietnam. There has been much written debate in recent years as to the difference between these two products. The main difference boils down to agreement that Ceylon cinnamon carries the greater health benefits due to the extremely low levels of coumarin.

To create PMD’s Chai Cinnamon tea we start with a quality black tea. Our tea is sourced from the Dimbula region and we source a Pekoe grade. The small leaf grade provides excellent body and strength in the cup and gives balance to the spices that will be added. Teas from the Dimbula region on the western side of the Island are known for their robustness and this is another reason why we source from here.

Sri Lanka’s best spice gardens are found in the Kandy region. This was the first region that had tea planted in the 1870’s by James Taylor. The elevation of the spice gardens sits between 2000-4000ft. The temperate climate is excellent for growing spices, which usually make their way into the many fiery curries that one can enjoy in the sub continent.

From the Kandy region we source ginger, pepper cloves and cardamom. However no Chai from Ceylon would be complete without a double shot of cinnamon that is sourced from the low country. Ceylon cinnamon adds a sweetness to the final taste. To cap off the experience some warm milk and little bit of sugar must be added after brewing. While I never add sugar to any other tea, I find that a little bit of sugar helps bring out the aroma and taste of the spices

Dananjaya Silva writes on behalf of PMD Teas, three generations of tea production improving the lives of the locals in Sri Lanka.

Born into a family with tea leaves embedded in their genes and at the root of their traditions, Dananjaya Silva (the Managing Director of PMD Tea) was already one cup of tea away from where he was meant to be. As a youngster, he never considered a potential career in the business nor the industry, instead favouring a Law degree and a dream away from joining the Royal Marines. It was his travels after University and his link with his paternal grandfather that encouraged him to learn more about his rich family history and thus started the cogwheels on his roller- coaster spiral into the world of tea. Dananjaya realised that he had to understand the tea trade from the ground up in order to be able to truly reflect his grandfather's legacy. It was on this thread that he decided to spend a year travelling Sri Lanka, working on various tea plantations and immersing himself into the intricacies of tea manufacture. His love for all things tea began on this journey. There was a gaping hole in the market to offer consumers the word over with garden fresh, o-zone friendly tea from Sri Lanka. It has proved a hit within the UK with historic establishments such as Harrods and the Queen's personal Farm Shop as well as some of the worlds leading hotels. Dananjaya hopes that he will not only be able to teach those about the proper cup of tea but to allow people to enjoy their favourite teatime sip without harming their body or the environment. Herein lies the greatest challenge of them all.

Blast from the Past: New Marketing Tools (Circa 2011)

Blast From the Past: Why do endurance athletes drink tea?

Blast From the Past: The ritual of tea