Blast from the Past: What is Artisan About Artisan Tea? 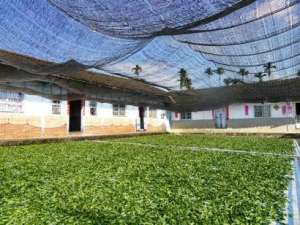 As people interested in premium teas, we have all been exposed to the term “artisan” used in many contexts. This begs the question, what actually defines a tea as being artisan?  This post is meant to begin a conversation, with follow-ups, on ways this issue is being addressed within the industry here in Taiwan.

Reflecting on this question, I was inspired to call on a friend with passionate conviction on the topic. I first visited Mr. Lin in his tea factory and home – a traditional three-sided house on Dong Ding Mountain – some 20 years ago. One of three brothers who inherited the tea farm, he became the representative of their tradition by moving off the mountain and raising his family in the city. He has been a professional tea judge at the Lu Gu Farmers’ Association Tea Competition for many years, and has been continually involved in the education and representation of tea culture in Taiwan. He is passionate about his inheritance of the Dong Ding Oolong tradition, as well as highly informed of the trends in Taiwan’s tea industry – both past and present.

In two words, his essential definition of artisan tea is all about “handmade” and “oxidation” – which in this case are one and the same process. The leaves need to be shuffled by hand repeatedly over several hours throughout the oxidation process. These requirements immediately led into other considerations, such as how much tea can be harvested and processed promptly using traditional methods; and who is employing these deep and complex procedures. A lively discussion!  Of course, this is the response from a Traditional Dong Ding Oolong Tea artisan – so we are referring here only to what defines “Artisan Oolong Tea.”  Our conversation touched on many factors, but the answer centered on processing methods – which prompted the recollection of my early visits to tea country. 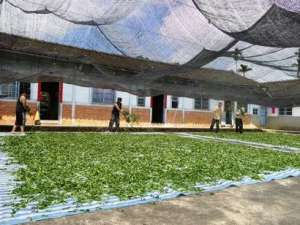 My first experiences of tea being harvested and processed was in this context of Dong Ding Oolong production. I stood and watched, and sometimes lent a hand, as the freshly harvested leaves began arriving at mid-morning into early-afternoon, to be spread out for solar oxidation, which began the long process that went late into the night of indoor oxidation, followed heating, rolling and drying.

At that time, all I saw in the factories I visited were the traditional woven bamboo trays that were filled by hand with freshly wilted leaves exuding a heady, yet truly refreshing, aroma in racks about 200cm high, mounted on wheels. A small forest of racks filled small spaces in which they were rearranged systematically amidst frequent shuffling of the leaves in their  trays by hand, combined with tumble rolling in a large, woven bamboo, horizontal cylinder.. The timing of the shuffling by hand and tumbling was largely determined by examining (touching, smelling, and seeing) the state of the leaves and how far along in the wilting and oxidizing process they were.

harvests – which then were maybe 600 台斤 茶青 or nearly 700 pounds of freshly harvested leaf – which produces about 175 pounds of tea. That was a large harvest on the farms I was familiar with at that time, but that’s only because my first contact was with Traditional Dong Ding Oolong artisans whose tea factories were typically built into their homes.

This is the context and small-scale production level that my friend referred to in response to my question. It is his firm conviction that artisan oolong tea is comprised of hands-on contact with the leaves as they are processed. The frequent shuffling of the leaves by hand is an essential aspect of proper oxidation.  According to him, without this process, it is not artisan tea. Beyond oxidation, there are other steps in the processing of oolong that have been mechanized or simply eliminated – such as rolling methods and post production roasting – that are essential in the making of Traditional Dong Ding Oolong.

Hands-on contact with the leaves is far more than a labor intensive processing method. It is based on an experienced understanding of the overall conditions that each harvest entails – beginning with the growing season, the weather at harvest time, and the state of the leaves as they are processed.

This understanding of the leaves prompts the artisan to adjust the processing methods according to the current conditions. The freshly picked leaves are also brewed and tasted at different stages in the processing which determines the timing and extent of each step.

Traditional tea making is an integrated process determined by expertise that is gained over years and generations of careful observation and trial and error learning. This is why it cannot be done by standardized procedures employed by hired labor. It requires a living apprenticeship that transmits understanding and skill.

Images provided by the author

Andy Kincart is co-founder and sourcing director of Eco-Cha. He has lived mostly in Taiwan since 1989. In 1993, his appreciation for the locally-grown tea that he had already developed led him to the Dong Ding Mountain tea growing region. Since then, it has been an ongoing exploration of the world of tea which has provided a fulfillment that is unique to this island. Since 1997, Andy has been sharing this passion for tea as a private exporter of quality Oolong Tea. Now, after decades of an ever-deepening appreciation for this cultural treasure – he is sharing Taiwanese Tea and tea culture with a larger audience through Eco-Cha.

Blast from the past: Recipe for kukicha citrus sole

Tuesdays With Norwood, Re-Steeped: The Trade in England & The Era of the Clipper Ship

Blast from the past: we all love tea, we may just see it differently