I’ve only reviewed two tisanes before, but both interesting ones, a mulberry leaf “tea” and coffee leaf “tea.”  To keep this simple, I’m going to recognize that tea enthusiasts don’t like to share the word “tea.”  Dictionaries are divided on whether “herb tea” is valid use of that word or not (I wrote a blog post on that), but it doesn’t seem natural to use “tisane” or “tisane infusion,” which is probably actually a bit redundant since the definition seems to cover the herb and the liquid, as for tea.  I’ll call it “sage tea” from here on out, not trying to step on toes, but I’ve got to call it something. 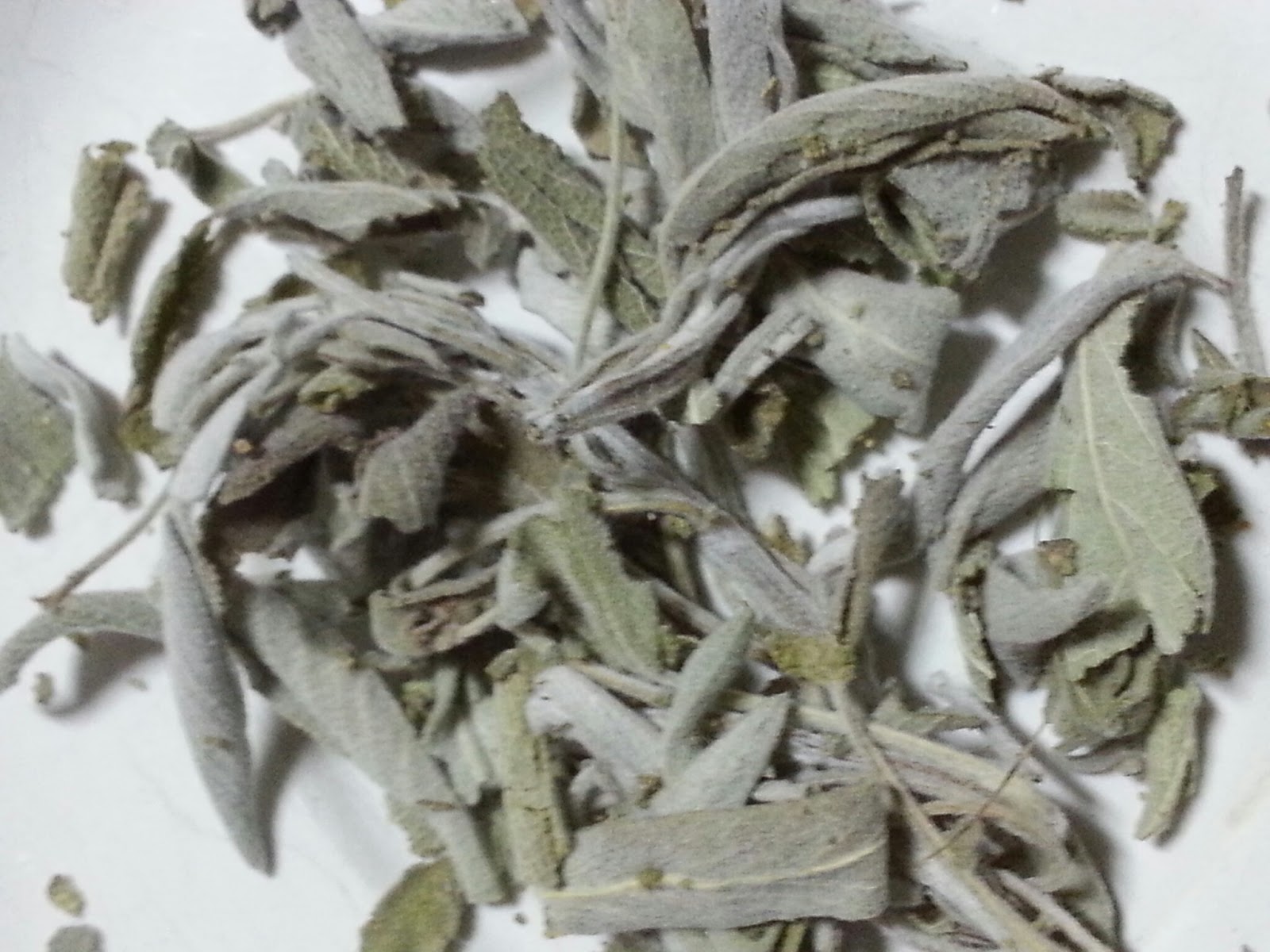 A little background:  I drank tisanes, which we used to call herb teas, for a long time before “real” tea, Camellia Sinensis.  Of course, I had black tea from tea bags as a child too, but I mean I first drank loose tea regularly only about seven or eight years ago, after trying lots of tisanes for a lot longer than that (so I’m not exactly young now, per the math).  Sage tea was my favorite.

It’s not really high on a list of popular herbs to be made into tea (it still sounds strange putting it that way, but it’s not like “made into an herbal infusion” doesn’t).  I probably only ever tried sage because I experimented with so many.  Of course, there wouldn’t really be any limit to what could be brewed as a tea-like drink: any herbs, any flowers that aren’t poisonous, berries, fruits, fruit rinds, tree barks, edible roots, etc.  My former favorite producer sold plain versions, forty-six on this website version, but probably others too.  Their description for sage:

Since ancient times, sage (Salvia officinalis) has been associated with good health. The herb’s Latin name, Salvia, translates into “to be saved.” In Chinese, Indian, and North American herbal practices, tea made from sage leaves has been used as a soothing, cooling digestive aid [and] produces a peppery fragrance with a mildly astringent flavor.

This introduces the two things I’ll say more about, the description/review and health benefits.  I’ll also mention the source for what I’m reviewing first.  It turns out that you simply can’t buy sage tea or decent loose sage in Bangkok where I live (who knew), so I did finally find it from a tea and tisane vendor in Croatia, Pampa Tea.  Apparently Dalmatia, essentially a part of Croatia, produces some of the best sage (remember the word on the spice bottles?), although I’d expect different sources with similar climate or other plant type variations might be fine.

Health benefits, or at least a bit on the claims:

Of course I’m skeptical of the claims, with all the same context related to Camellia Sinensis applying to that too.  In short, it’s hearsay, likely partly true, or maybe not, nearly impossible to verify or to evaluate related studies as evidence.  And the claims are most often coming from people selling the products, so bias factors in.  It’s an interesting twist that the Alvita vendor site and product reference includes a warning:  WARNING: Do not use if pregnant or nursing.

All that said I’ll cite one reference for a health claims description, which may or may not relate to actual health benefits, but still interesting to consider:

Saliva officinalis originates in Mediterranean regions, and is well known as a culinary and medicinal herb. It is largely used for digestive and menopausal problems, particularly hot flashes, and is traditionally associated with longevity: modern research has shown that it can slow the progress of Alzheimer’s disease. Garden sage is a valuable antibacterial, antiviral and antifungal agent. Taken internally, the herb will fight infection and will also diminish secretions of all kinds, including perspiration and saliva. Garden sage tea or tincture is specific for drying up milk production during weaning. The herb stimulates memory.

Wow, right.  Given my memory maybe I should drink it just in case.  In the one other tisane review I did for mulberry leaf tea, I did some sampling of where those separate claims stood in terms of research references, and at a glance some of it looked okay.  But again, who knows really?  I ran across a seemingly impartial US Department of Health site that took a more balanced look at what the evidence really says:

Two small studies suggest that sage may improve mood and mental performance in healthy young people and memory and attention in older adults. Results of another small clinical study suggest that a sage extract was better than placebo at enhancing thinking and learning in older adults with mild to moderate Alzheimer’s disease.

Good, but not based on much research.  And then also a warning against going overboard with dosage:

Extended use or taking large amounts of sage leaf or oil may result in restlessness, vomiting, vertigo, rapid heart rate, tremors, seizures, and kidney damage. It also may lead to wheezing. Ingesting 12 drops or more of the essential oil is considered a toxic dose. 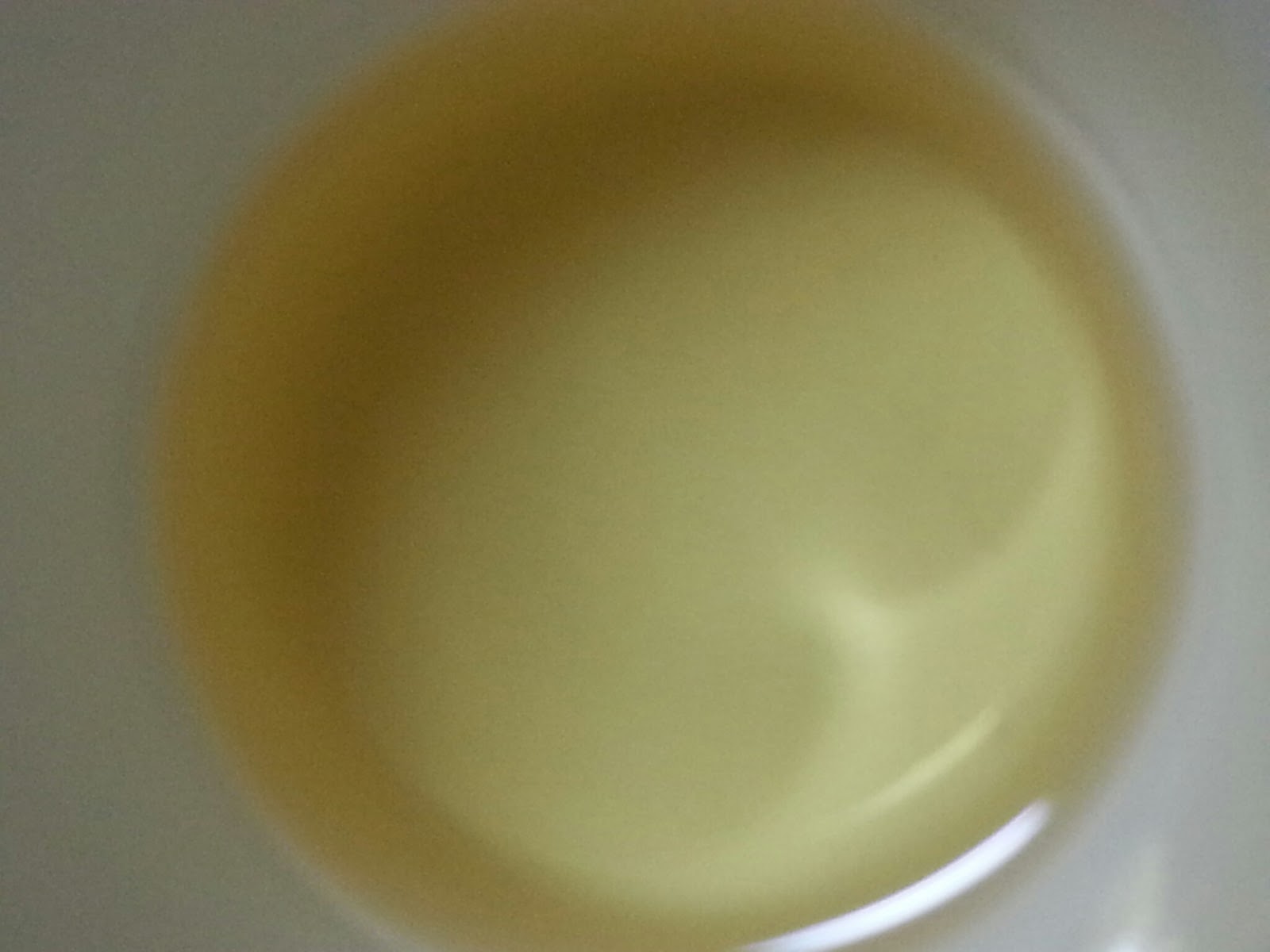 It was interesting to try the herb tea with my newfound tea-trained palate (based on two years of going overboard; I am now somewhere between completely new and trained).  I still liked it.  I had to make it twice to adjust brewing since it’s a good bit stronger than tea leaves, and there was some expectation shift, but it will be great as something I can drink later in the evenings. 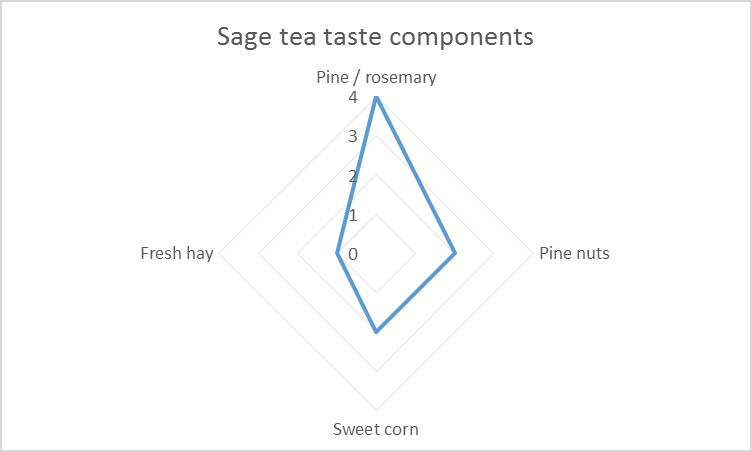 As a radar graph

The taste is sweet, but also a little peppery.  Secondary taste components include pine or rosemary elements, pine nuts, sweet corn, and fresh hay.  Subsequent infusions tasted more like pine, more peppery, and less sweet, with less of those softer earthier components.  You might naturally say: wait a minute, it just tastes like sage, not like those things!  Or you might point out that I forgot to put pepper on this graph, but I’m not sure if the tea tends to taste like pepper or if that’s a slight spiciness common to chilis and black pepper, more a feel than a flavor, so I skipped it there.

That’s sort of the point; tea enthusiasts might tend to think of a lot of flavors as “atomic,” singular, but tea is completely the opposite in that it is open to break-down into countless taste components.  There’s almost an implied contradiction in that.  For me, some tastes naturally seem complex, like those found in nutmeg, so at times I want to compare a tea description to part of a separate taste.

Maybe that taste analysis in graphical form would make more sense referred back to tea.  Here is an example from Tealet’s site and tea analysis, related to a Sencha. 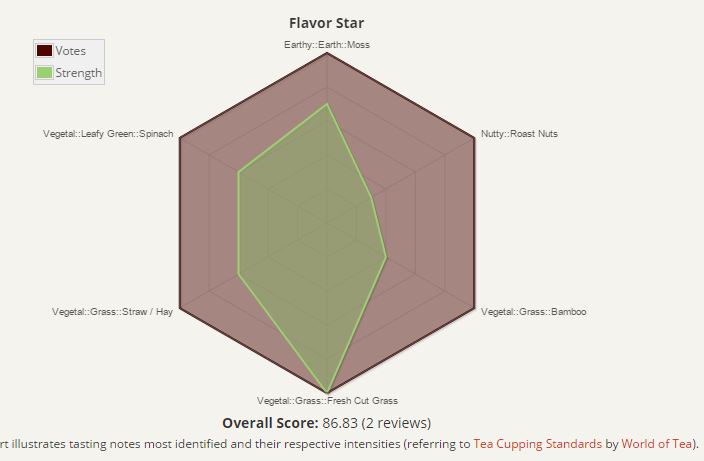 It’s funny how even though I tasted that sage tea it’s odd to think it tastes like corn and fresh hay but somehow it feels more natural to think a Sencha might taste like moss, spinach, roasted nuts, hay, and bamboo.  More on such tasting standards can be found at this World of Tea reference page, not really related to making graphs.

All of this started me thinking about how tasting different types of things might have common elements, which, of course, started with a comparison to wine tasting, which I’ve already written some about.  The next tangent is even more interesting, and much less intuitively comparable, but still in the works, so I’ll chase those ideas and save it for another post.