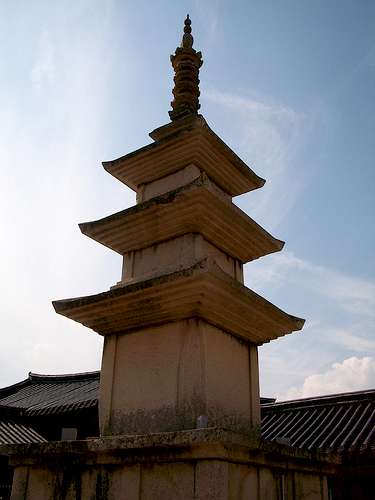 Before I began my Korea Journey, I thought I would study Korean Seon in a Seon center in a temple after I arrived in Korea. Actually I have heard that it is easy to find a Seon center where Buddhists practice Seon in South Korea. I thought it would be my way of

Seon study, too. I had never thought I needed to find a Seon teacher whom I really trust and follow, from whom I can truly study Seon. I never thought it – it just happened.

Monk Daijing seemed to want to lead me to a small hermitage. We stopped in front of Bulil-am(佛日庵)，where the famous monk Bopjong, the author of many Buddhist bestselling books in Korea,  resided until he passed away two years ago.  Now, one of Monk Bopjong’s disciples lives here, Monk Daijing told me.

Bulil-am is quietly located in the deep mountain. The voice of wind and birds are the only sounds. There is a small wooden sign reading, “silence,” at the entrance of the Bulil-am.

Daijing and I sat at the stone chair in front of the Bulil-am, taking a rest, sliently. After a while, we left and hiked to Songgwangsa temple. While hiking on the road down to Songgwangsa, we met a monk going up to Bulil-am. This monk looked a little younger than Daijing.  He asked us to go to Bulil-am with him, in the manner of a spoiled child. Daijing told him we had been there and now were on the way down.  The young monk said, “Why not go there once more? Once more!”

I could not help smiling – what is going to happen when the serious Monk Daijing meets this totally different monk?

Then Monk Daijing introduced me and the young monk asked me: “How long have you been here?”

“Four days? Why not come to play with me?”

“I do not know where you live.”

“I live there,” He pointed with his finger.

“OK. Let him,” He pointed to monk Daijing, “bring you to my hermitage!” He looked the time, “Say, in one hour, that is ,17:20, come to my hermitage to have dinner. You know, my dinner is very delicious! Much more delicious than what you had in Songgwangsa temple!”

This chance meeting brought me to the Inwall-am, where the young and different monk resided. I say the monk is different, because most monks, like Daijing, are very serious but inflexible. This monk is a little different, for example,

I asked him, “Do you think I should get up to attend the Buddhist rites at 3 o’clock in the morning?  I feel it is difficult for me. But I am now in the temple and I have to obey the rules in temple.

He said, “You do not need to obey the rules. Those rules are for the monks who sleep at 20:00 in the evening. What time is your sleeping time? Even if you go to bed at 20:00, you could not go to sleep if you always sleep late. And if you cannot sleep well, you need more sleep in the day, or become tired in the day. I do not think the rule of taking part in the 3 o’clock Buddhist rite is more important than that you have an enough sleep.

I think he is a little bit different. Most monks would tell me I should obey the rules in temple. I feel he is kind of the mix of Laowantong (老顽童，means “old child”)  and Yangguo(杨过),* a monk with a child’s heart and tendency of challenging the traditional rules. Maybe because of this, I like him.

Later, he became my Seon teacher.