My grandmother kept her tea in a wooden caddy that had an ivory band around the lid, and a tiny brass-bound lock that turned with a smooth and promising click. The lock, I suppose, was an echo of the 18th Century, when tea was a luxury so rare and valuable it needed to be protected from the servants.

Raise the lid, and inside was a childish dream of a box: two compartments with snug and perfectly fitted lids, each lifted by a small, knurled mahogany handle. The lids were almost interchangeable – but not quite. One, I think, was very slightly smaller than the other; and the sides lined up exactly only in one direction, like a child’s toy. The compartments were lined with lead, covered in silver paper, which helped give the caddy its mysterious and alluring weight. Say what you like about lead, but it’s a glorious substance in its own right – blue-grey, malleable, easily melted, easily worked. Some of our plumbing (from plumbum, the latin for lead) was still made of it back then.

The workmanship hinted at secret drawers, like a diplomat’s escritoire – or a Joe 90s’ briefcase – cunningly joinered to be invisible to the uninitiated. It should have contained – what? Gold doubloons, perhaps, or strings of pearls; or a letter on which the fate of empires might depend, onionskin folded and refolded, inscribed by hand in a spidery copperplate.

Inside each compartment was loose-leaf tea, and one small wooden scoop. In the first was Darjeeling, scattered as promised with flecks of gold. The scent was grassy and fresh, but it wasn’t until later that I learned that the grade of leaf was known as TGFOP, Tippy Golden Flowery Orange Pekoe. What astonished me even then was that every leaf was furled, like an umbrella, along its length. The second compartment contained Assam, my grandmother’s breakfast tea. The leaf was much smaller, but silkier to the touch.

Both teas had an ineffable color, which I liked. The Darjeeling, with its golden tips and hints of green, was like a bolt of Hebridean tweed, with the grain of a rare wood. The Assam was absolute, uniformly black, but the sort of rich unadulterated black you don’t see much nowadays – letterpress black, the black of colonial pamphlets or Italian engravings. Like the world’s first postage stamp, Queen Victoria’s Penny Black: dusty black, with a bloom all its own.

The texture of tea is something I’ve never quite gotten over, and it’s what I miss most when I resort to the companionable teabag, with its filling of macerated leaf. I love Chinese gunpowder tea, rolled and furled the size of a pinhead, the color of dull jade; the spidery, generous leaves of Lapsang Souchong; or the susurrating fillets of panfried Long Jing, still whole and perfectly – irrationally – flat. These are hand-picked, hand-made, bearing the stamp of human skills and traditions. We live in an age of perfect, digitally controlled precision: everything we need is the calculated product of design, technology, and mass production. So while it’s only millionaires who can afford a Savile Row suit, or a hand-built car, or a pair of tailored brogues – or cigars rolled on the thighs of women in the Caribbean heat! – it’s nice to know that you can still have tea. China or India, anyone? 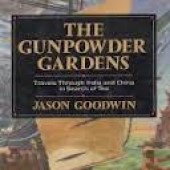 Edgar Award Winner Jason Goodwin is the author of the Yashim thriller series set in 19th Century Istanbul, translated into over 40 languages. But it’s not how he began. In "The Gunpowder Gardens or, A Time for Tea: Travels in India and China in Search of Tea," Jason set out to explore the history of the tea trade on the South China coast, the tea auctions of Calcutta, and the tea gardens of the Himalayas. "The Gunpowder Gardens was the first book I wrote," Jason says. "It was a spectacular moment for travel-writing, and the story of tea was a fascinating subject." Shortlisted for the Thomas Cook Travel Book Award, "The Gunpowder Gardens" takes the reader on a journey through the tea lands of India and China, blending a fascinating account of the history - and flavor - of tea with vivid travel narrative. With a memorable cast of characters, from Hong Kong’s Professor Tea to The Nose in Darjeeling, "The Gunpowder Gardens" is often funny, always vivid, and – in the words of The Sunday Times – "full of fascination." "Readers are fortunate," said the New York Times. "Jason Goodwin has been inspired … to devote his funny, evocative first book to the history and geography of tea … It has summoned up all the tea in China and India. And made one thirst for a spicy cup of the brew."

The connectivity of tea