I had a lovely experience recently at TÈ House of Tea in Houston.  I stopped in on a Wednesday evening after work to get something to eat and try some new teas, and was not disappointed!  It’s a cute little place, tucked in an unassuming corner of Montrose, with little brick cottages and tree-lined streets all around.  Once inside, you have a choice of sitting at a table or in one of the many cozy conversation areas with sofas and comfy chairs.

I went up to the counter to order, and got into a great discussion about teas with Julie, the young woman working the counter.  She has always been interested in tea, and since working there had become interested in learning even more.  I recommended the STI tea certification program, as that’s where I’ve learned most of what I know!  After I perused their tea menu, I decided to order a charcoal-roasted Tung Ting oolong.  I had actually seen this mentioned online, so I was glad they had it in stock.  I also ordered a chicken-and-vegetable crepe-quiche mash-up (the name of which I don’t remember) that was absolutely delicious!

As I sat down, I looked around at the other customers.  There were a lot of people studying, including one guy who looked like he was practicing conducting, as well as a few people chatting with friends.  Shortly after I sat down, a gentleman came in, sat down on one of the sofas, and started crocheting.  He had ordered a pot of tea, and after a while a few people joined him – it was a knitting club!  They were having a lively conversation, which I was unabashedly eavesdropping on, and giggling about at some points.  Before I left, I stopped by to ask them about their club.  They said it didn’t have a name, other than “knitting at TÈ House of Tea”!  They meet there, drink tea, eat treats, and chat.  If I lived in Houston, I might have to join them.

When my tea came, I opened up the gaiwan to take a whiff, and inhaled a beautiful aroma of barely smoke-tinged vegetables.  The taste of the oolong held up to the promise of the scent – it had a beautiful vegetal taste, with just a hint of smoke.  It was really more of a warm, woodsy taste than that of actual smoke – it developed the oolong flavors and gave them extra depth.  Sipping it along with the chicken-vegetable crepes was a great combination – they really complemented each other.

All in all, it was a wonderful experience at a lovely little tea place.  It’s very relaxed and low-key, but with good tea and good food, you don’t need much more.  Their slogan seems to sum up their approach:  “We don’t make fast food, we make fresh food as fast as we can.”  And they also make some great tea!

The true colors of tea 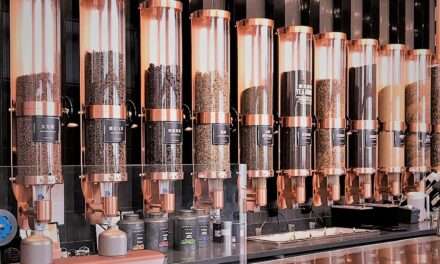 How Are They Different?