Leadership in the specialty tea industry

Since it has been a few years since I last attended the World Tea Expo (WTE), I was curious about any changes the Expo might have undergone, so I briefly interviewed about ten of the attendees I happen to know.  These attendees could be split into two categories – people who are industry “veterans” and people primarily in their twenties who are relative newcomers.  I know I would have been better informed if I had just gone myself, but this is what I found out second hand.  My primary question was who they thought the industry leaders were.  Although this was by no means a comprehensive survey, no one I asked could identify anyone at the WTE as a leader in the tea industry.  If the leaders weren’t at the Expo, then where were they?

Some of the veterans I talked to have been regular attendees at the WTE and have a record of success, although they are far from the mainstream.  They all said that the Expo is a place to get together with other tea people, but not much more than that.  The businesses they found to be interesting were the small companies that were taking risks by trying something new and innovative.  The other group, the newcomers, seemed to be very quality oriented.  One of the guys I spoke with in that group went around and interviewed the CEOs of the major companies, asking them about selling higher-quality tea, especially teas from China.  They all replied with the same answer – there is no market for that type of tea.  These young people later rented a suite and invited other like-minded newcomers to ditch the Expo’s evening activities to drink the tea they had brought, which they felt was unmatched by the exhibitors.

A lot of people, myself included, compare the development of the wine industry in America with the current growth of the tea industry.  This past summer, I had the opportunity to travel around Yunnan with a certified master sommelier.  From her, I learned about the evolution of leadership in the American wine industry and that the wine market heard some of same things that are being said about tea, such as “Americans will never appreciate fine wine, American culture will not support wine drinking, and there is no market in America for fine wine.”  As in tea now, there were no clear leaders in the American wine industry at that time; there were only businesses perpetuating the status quo.

Regardless of whether or not there were distinguished leaders at the Expo, Teavana seems to have captured the attention of people on Wall Street.  Now Goldman Sachs and Bank of America / Merrill Lynch – the same folks who brought us the collapse of the economy – are bringing Teavana to the American investor.  I won’t be investing myself, and there are signs that some Wall Street investors are not that excited either, according to this piece in the Wall Street 24/7.  But this attention on investment poses an issue: Are people beginning to look at Teavana as the industry leader?

It is true that they have made a lot of money, more than any of the specialty tea companies that started out in the late 1990s.  However, one must consider all the forces at play that made Teavana what it is today.  First and foremost, their company emerged on the market when nutritionists and the American media began their high praise of the health properties of tea that had been spurred by a flood of medical research.  That time also marked the dawning of e-commerce as well as the establishment of Fair Trade and Organic Certifications as marketing tools.

This was the perfect storm of conditions that provided opportunities for American companies to buy cheap tea and sell it for four or more times of the original cost.  Since Americans didn’t know any more about tea than what the media was saying, companies could market that cheap, low-quality tea as premium tea.  Certainly, no one did this better than Teavana.  At the time of their founding, they didn’t focus their efforts on the budding Internet market, as did some other major players, but went straight for the money-making jugular – shopping malls.  They gave their stores a beautiful appearance by lining the shelves with cheap, knock-off Chinese teaware, along with a tea selection that was as artificial as the teaware, though the steep prices suggested premium quality.  Their products became instantly legitimized for most mall shoppers because they were in the mall and professionally decorated.  Using high-pressure sales techniques and capitalizing on floods of uneducated mall shoppers, Teavana spread rapidly throughout the U.S.  With this in mind, there are a number of people in and out of the industry that say, “Hey, we have to give some respect to Teavana – look how successful they are at making money!”  Are we really looking for leaders that most of us tea people don’t respect?  The sad thing is that many of the people outside the tea community see Teavana as the industry leader.  I believe that the lack of distinguished leadership is allowing companies like Teavana to represent the industry to the broader community.

I think the Expo itself could be more of a leader in the tea community, beyond merely providing a place for people to get together.  I think their advocacy for education is vital, but the educators and workshop subjects the Expo provides are too often settled in the status quo.  There are no sponsored forums at which participants can talk about the problems facing the industry, how to get better quality tea, how to raise the levels of integrity in making it, how to define industry ethics and practices, and how to establish meaningful definitions and standards.  The World Tea News (WTN) could be given complete independence, therefore allowing it to publish articles that may offend presenters at the Expo.  The World Tea Championships could eliminate the entry fees to compete and bring in judges with more experience and knowledge concerning Chinese tea that is new in Western markets.  I think those things are unlikely to happen, because tradeshows are businesses that exist to showcase the status quo, and the Expo, WTN, and World Tea Championships are businesses with customers.  Being in the business myself, I fully understand the risk of losing customers by being critical of the existing market.  Right now, it seems that the larger companies that participate in the Expo are favored.  This form of championship has degraded a market that is in need of a vision and leadership.

However, I do see leadership emerging along what are now the fringes of the industry.  There is no question that Samovar in San Francisco has developed a very successful business model that has a solid foundation in traditional tea making, and Jesse Jacobs did teach a workshop at the Expo.  I had a very interesting talk with him in one of his beautiful tea houses a few weeks ago, and I certainly see him as an emerging leader.

I think there are many other businesses that are not as well known in the market, businesses that are dedicated to quality and integrity in marketing and that have been popping up all over the country as well.  As they develop louder voices and accumulate more success, the conventional wisdom will find some meaningful challenges.  There are many tea news sites that are coming online that don’t have a dog in the fight and are not shying away from controversy.  Because of the Internet, small tea businesses are finding ways to skirt the American wholesalers and buy in small quantities directly with networked producers.  These small companies are also
demanding meaningful definitions and standards.  Consumers are being educated because of the democratization of information, making it harder to make unsubstantiated marketing claims.

It will be exciting to see how things shake out over the next ten years.  I am very confident and believe in our industry’s future.

Austin Hodge is the founder of sevencups.com.

Seven Cups Founder Austin Hodge is an entrepreneur with a focus on small international business development, dedicated to creative, sustainable, long-term business modeling. Austin is also a tea enthusiast and a Chinese tea student. Knowledgeable about import / export and international business with a focus on China, Austin is a Chinese government liaison with experience in e-commerce, retail / wholesale, and databases. In fact, Austin is many things to many people, including, but not limited to, Chongqing husband, father, grandfather, brother, perpetual student, geek, photographer, writer, blogger, blues musician, and food lover. Austin was the first American to be published in the Chinese International Tea Culture Institute's Journal; his paper there was republished in tea trade magazines across China. Also the Honorary Director of the Chinese International Tea Culture Institute, Austin has received the Global Puer Top Ten Outstanding Persons of China Award. Austin's company - Seven Cups - was the first American company to be granted a Chinese Trading License. 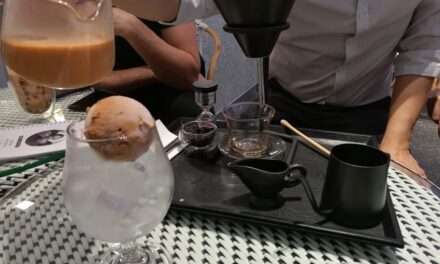 Is Specialty Tea Having a Moment? – Part 2

More on tea – a drink with jam and bread

Drinking a Cup of Tea I Stop the War

Green tea: The gift that gives you less of what you don’t want