Half of the people in the United States think school teachers are the bravest people alive.  The other half think we are insane.  Many people think teachers are overpaid.  After all, we work only nine months a year and get generous holiday and spring vacations.  In this post, I am going to dispel a few myths while I talk about a few of the perks.

The jury is still out on the status of my mental hygiene, but I can tell you that I am not very brave.  I lay awake at night worrying about certain kids, and many of the wee hours are spent flogging myself for something I said or did to someone’s beautiful child.  When I read an essay written by a child who has been or is being abused, my heart aches.  Girls who starve themselves to look like the latest airbrushed wraith on the cover of Vogue, or who refuse to come to school because of a nasty Facebook post, make me seethe.  These emotional extremes occur on a daily basis, but they don’t make me brave.

Few people know that teachers are contracted for a certain number of days.  My pay check is based upon the number of days I work.  I do not get paid for winter or spring breaks.  Because students do not attend school in the summer, I am neither paid for summer, nor can I collect unemployment benefits.  In the district I work for, we get five paid holidays per year: Labor Day, Armistice Day, Thanksgiving Day, Presidents’ Day, and Memorial Day.  We are not paid for Christmas Day, New Year’s Day, or Fourth of July.  With a Masters’ Degree, two endorsements, and 25 years of experience, my salary is much lower than that of other professionals with similar education and experience.  I am not complaining, because there are some amazing perks.

First, I have a captive audience all day long.  My enthusiasm for great literature and logical debate rubs off.  I learn a lot from them, too.  Just this last week, I learned what a “Bieber Concert” is.  For several days, I thought the kids were talking about a “Beaver” concert.  I wondered why anyone would go to a beaver concert, and what that would sound like.  Dueling chain saws?

I read in a student essay that we live in a “doggy dog” world, where only one person can be a “valid victorian,” and that person has “all the brains and none of the bronze.”  Make yourself a cup of tea, friend, and contemplate those constructions: a doggy dog world is certainly better than dog eat dog, and we can all agree that the valedictorian of any class is indeed a valid victorian.  Isn’t this fun?

In my fourth year of treating students to tea on Tuesdays, this ritual has reaped more benefits than you can imagine.  Preparing and serving tea to teens is an amazing display of respect for them.  They cradle the tea in their palms.  Voices become less strident.  Arguments – over whose turn it is to time the steeping, or which tea they will have – are settled quickly.  Attendance is better on Tuesdays.  Listen up, education president!

One unanticipated perk is my reputation as a tea geek.  I am often gifted with tea.  One student traveled to Thailand, and brought back a lovely oolong.  She couldn’t read the label, but the word “oolong” is universal.  Another student returned from Japan with two lovely green teas.  Some students are awed by the blends, “Lavender Chocolate Earl Grey” (just like it sounds) and “Rainbow Garden Huckleberry.”  These gifts have made for some interesting Tea Tuesdays!  Recently, our school choir traveled to England for ten days, singing in castles, cathedrals, and ruins.  One girl brought me a box of tea.

“Rafe, you should see the choices of tea in the markets there!  They have a whole aisle just for tea!  I had such a hard time choosing!”  This young woman speaks in exclamation points.

“That’s why someone said ‘freedom is the absence of choice,’” I replied.

“Yeah!  I couldn’t decide!  So, I got you this!”  She held out a beautiful tin of Scottish Breakfast.

“Thanks, kiddo.  We’ll have some today.”  The students in charge of tea-making that day were Jesse and Connor.  Without looking at the tea, I let them do the jobs they were so proud of performing: setting out cups, rinsing the pots and strainers, measuring the whole leaf, and making the tea.  Soon kids were sipping, and looking as if each had his lower lip glued just behind the front teeth.  It is perhaps the second time this year that complete and utter silence has graced my cluttered classroom.  Oops.  The Scottish Breakfast tea was finely cut, unlike the Angel Tears Oolong we’d been enjoying.  I sipped my cup, and found my lower lip seeking refuge as well.  Gabriel’s deep voice came from the back, “Hey, uh, Rafe . . . I know you don’t believe in sugar, but . . .”  It was a teachable moment.  F. Scott Fitzgerald’s Bridal Party was put on hold.  We did a little show-and-tell about the difference between whole leaf tea and tea that is cut fine.  Measurement was discussed.  In the meantime, Gabriel passed out Jolly Rancher candies, unbeknownst to me, which the students planted in their teacups.  It wasn’t an improvement, and for the first time in four years, few students drank the tea on that Tuesday.  Embarrassed, the kids stacked their full and cold cups in the dishpan.

A few days later, I brought the cups to the staff lounge to rinse and put them in the dishwasher.  In every cup where a Jolly Rancher had been dropped, mold was growing.  I’ve never seen mold grow in a teacup! 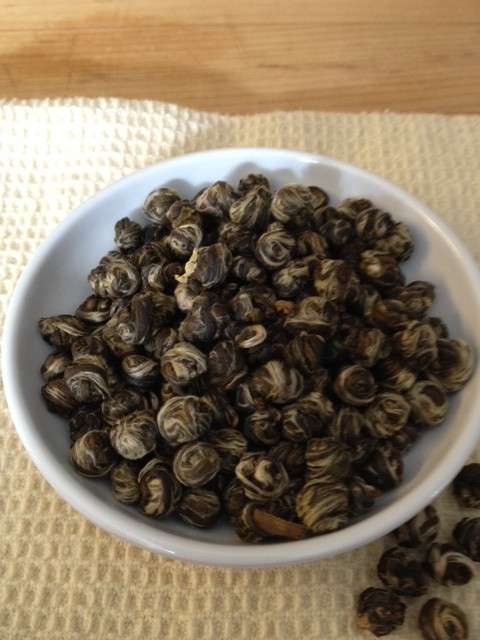 Fall food + teas – It’s all about the flavor