“He better be careful drinking that.”  The speaker was a registered nurse on the 11th – the Cardiac Patient Care – Floor at Oregon Health Sciences University.  “Caffeine is really dehydrating; and that’s his big problem right now.”  The “he” she was referring to was/is my husband of 26 years.

“It’s the third steep,” I interjected, “of a very mild oolong tea.”  The way she widened her eyes in disbelief convinced me that she was either very angry with me for “arguing,” or utterly unfamiliar with the context in which I was using the word “steep.”

It was four days after open-heart surgery.  Open-heart surgery means that surgeons saw through your sternum, spread your rib cage (like one does to a game hen when one plans to roast it on the barbecue), and remove your heart while you are placed on a machine that breathes and beats for you.  Then, your heart is “cooled” before your sticky valves are replaced and your calcified arteries bypassed.  Your rebuilt heart is now ready to be bolted in, started up, and taken for a test drive before the surgical team matches up your ribs and wires you back together.

If it sounds like a big deal, it is.  Sticky valves and calcified arteries are a natural part of the aging process.  As we age, calcium is depleted from our bones and goes places it wasn’t intended.  Cataracts, kidney stones, and arthritis all are effects of calcium from our spines and long bones going shopping for a new home.  The calcification of heart valves is so common that more than 100,000 surgeries are done each year in patients over the age of 65.  The number of bypass surgeries easily doubles the number of open-heart surgeries performed each year.  So, while it is a big deal to the individual about to be butterflied, it is a common and successful treatment.  Patients are usually in the hospital just five to seven days after the surgery.

Three days after surgery, my husband was begging me to smuggle a pot of tea into the hospital.  Each of the meals served was a plate of cold polyvinyl chloride in amazing textures, colors, and shapes.  Arriving 45 minutes after he ordered, it looked just like roasted vegetables with beef tenderloin slices, but was actually the same compound used to make those black pipes under your kitchen sink.  Like most patients, Rafe was fooled by the menu descriptions at least eight times, and ordered again and again.  One bite of the stuff, and he was done.  The tea he ordered was the ubiquitous “Orange Pekoe” of the Red Rose genre, and he drank every drop.  The bag had been in the water for at least ten minutes, but the taste was vaguely tea-like, virtually the only familiar taste in a most frightening environment.  He asked me one day what “Orange Pekoe” meant.

“That’s tea that is mowed and baled when it is harvested.”  (Never to be faulted for lack of an answer, this one should be questioned, dear reader.  Just sayin’.)

“Like hay. Hay harvest is pristine compared to Orange Pekoe,” once I start lying, I can’t stop myself.  It was here that he begged me to bring him some “real” tea.

“Bring some of that Ti Kwan Yin you ordered from India.”

In honoring his request, I was confronted by the misinformation about tea that is repeated ipso facto by the medical community:  tea is loaded with caffeine; tea is dehydrating.  The former assertion is ludicrous when compared to an equal serving of Americano (watered espresso coffee) – and becomes more so when the multiple steepings possible with tea are factored into the caffeine-per-cup ratio.   That tea is dehydrating is also false.  In England, researchers gave one group tea and another group equal amounts of warm water over a several-hour time period.  The participants were then monitored for the amount of urine passed.  The next day, the participants reversed roles so that tea drinkers from day one were warm water drinkers on day two.  The results?  Tea drinkers did not pee more often than those who drink water, perhaps less.

Going back to the beginning of this narrative, I was tempted to ask the nurse what difference she imagined existed between the caffeine content of those floor sweepings known as Orange Pekoe and a teaspoon of a lovely green oolong on its third steep?  And why, I wanted to ask, do you offer Orange Pekoe with every meal if it is so harmful?

A wag once said that it is unwise to get into a battle of wits with an unarmed person.  I might add that one mustn’t question the sacred myths of modern medicine while one is in their clutches.

Some thousand cups of tea later, Rafe is healed, back at the gym full time, and already looking forward to his next cup of tea. 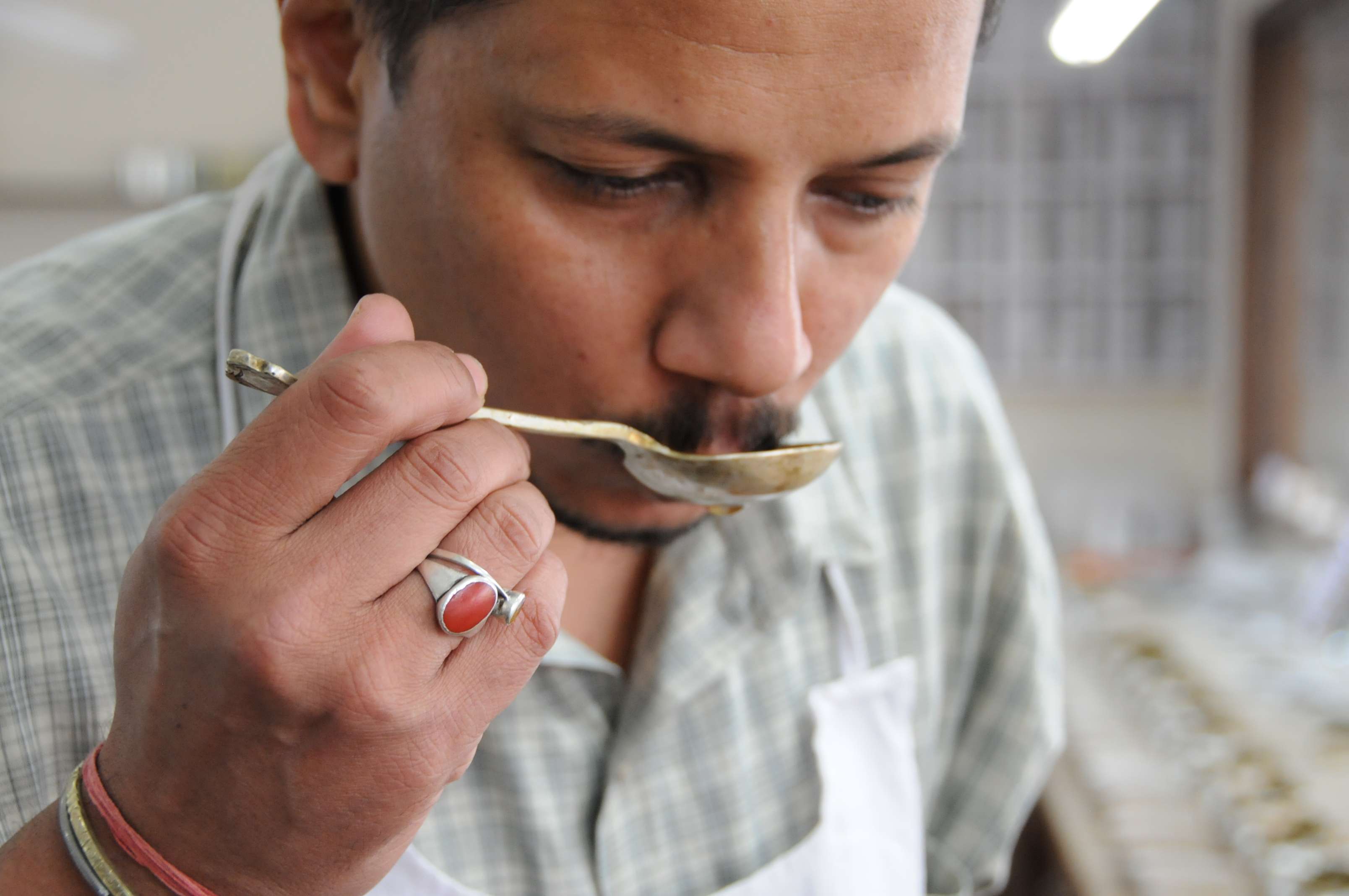 Inside the tea-tasting room of a Darjeeling tea garden