Diving deeper into the tea world, one cannot help but notice a certain animosity that has flared up between coffee and tea drinkers.  Opinion pages, editorials, scientific studies, and even poetic works all illustrate the troop movements behind this not-so-silent war.  Both sides will tell you how their beverage of choice is better for your health.  Both sides will state that their favorite beverage will make you thinner.  Both sides will even exclaim that their personal choice of refreshment will make your teeth healthier, treat cancer, and give you a pet pegasus named Morton, with plenty of evidence to back it all up!  I understand the potential health benefits from drinking tea, but why does that mean that a person can’t sit down with a good cup of joe in the morning?  Where does this partisanship come from?  The battle lines have been clearly marked for many – you’re either a tea person or you’re a coffee person.

The health benefits of both coffee and tea are as widely confirmed as they are disputed.  Proponents of each are quick to point out the benefits of their own personal choice while ignoring similar benefits derived from the other and highlighting its side-effects.  It is purported, for example, that both coffee and tea reduce one’s risk of diabetes and increase overall mental activity, but you’ll only ever hear that coffee gives you the

jitters, while mateine – which is really just another name for caffeine – supports total mental health and doesn’t deliver the same “crash” associated with its sister chemical.  Why the polarity?  Where’s the love?

I realize, of course, that personal preference has much to do with the polarization of the two camps and that people naturally tend to defend that which they are passionate about.  My concern is that no one seems to give the other side the benefit of the doubt.  You’re either for us, or against us.  So what’s the deal?  I’ve personally found peace between the two beverages and I would dearly love it if you, our readers, could shed a little light on the subject and help us to understand one another a little better. 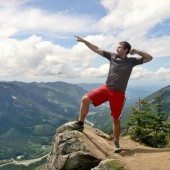 Born and raised in Southern California, Zach Hodgson is proud to be part of the T Ching family, working from his new home in Seattle, Washington where he currently makes his living as a freelance photographer and graphic designer. You can find some of his work on his personal web site at www.ZachHodgson.com. His love for tea goes back several years and his affection for photography goes back even further. He received his first camera, a 110 Instamatic, as a gift from his parents when he was only a small child. He received formal training in both the graphic and photographic arts in college, where his professors were quick to point out his natural talent for composition. In 2007, Zach received a Bachelor of Arts in Graphic Design, and left college with a life-long love for learning and new experiences. He finds himself most often enjoying P.G. Tips black tea, Yerba Mate, and Sencha and Genmaicha green teas as well as an occasional masala chai, often out of one of his mother's hand-thrown mugs.

Thirsty kids and the search for healthier refreshment