Green tea plays an integral role in Japanese culture.  Japanese people diligently practice the precise art of brewing and serving tea.  However, the manufacturing process begins the journey of crafting the perfect cup.

Japan is the only country that uses mechanical shears.  Introduced in the nineteenth century, these fast, efficient machines shear 200-300 pounds of tea during the harvesting season.  Highly skilled workers oversee the cutting and sorting.  Limited quantities of high-grade tencha and gyukuro are handpicked.  All tea manufacturers use the same precise processing method to produce aracha.  Aracha is unrefined green tea leaves.

After tea leaves are picked, they are stored in a cool pre-server, remaining there for several hours before entering the production process.  The first step is steaming the leaves for 30-40 seconds to stop the oxidation.  After steaming, the leaves are allowed to cool to room temperature.  Next, the leaves are placed in a primary dryer/roller.  This enclosed machine blows gentle, warm air onto the leaf while mechanical hands toss the tea in a continuous motion.  Next the tea is rolled in a rotary rolling machine, which rolls the tea in a circle over a grooved bottom plate.  The motion and pressure help distribute the cell juices in the leaves evenly.  Then the leaf is placed in the second tea roller and dried further.  Finally, the tea is placed in a final roller, where paddles push the leaves over a grooved plate to shape them.  The leaf has about 13% moisture at this point and is called aracha.  The tea is vacuum packed and saved until later when it is blended to produce the final product.

Aracha serves as the base for tea artisans to skillfully finish the tea through a refining process.  During the refining process, aracha is sorted, separated, and dried.  This process brings out the balance of flavor, aroma, and color.  The moisture in the leaf is reduced to five percent.  Refined aracha is called shiagecha.  All tea companies and artisans use the shiagecha method to finish processing the tea.  The shiagecha method produces sencha, gyukuro, and bancha.

From plant to cup, the Japanese strive to produce the best cup of tea.

Tiffany grew up in Southern California, drinking herbal, black, and chai tea. Herbal teas kept her immune system strong. Black and chai teas helped her stay awake during her math lectures at Claremont McKenna College, where she earned a degree in Economics/Mathematics. During her junior year, Tiffany participated in a Japanese tea ceremony. A delegation of Japanese college students toured the world, performing a Japanese tea ceremony to promote peace. After graduation, Tiffany accepted a position as an English Conversation teacher in Tokyo, Japan. She spent one year in Japan, teaching English, drinking tea, and seeing historical sites. Japan exposed her to loose-leaf tea, Japanese tea, and English tea time. Returning to the U.S. a few years ago, Tiffany found it difficult to find loose-leaf tea. She decided to start Boutique Teas. Boutique Teas will offer a selection of unique loose-leaf teas rarely found in the U.S. 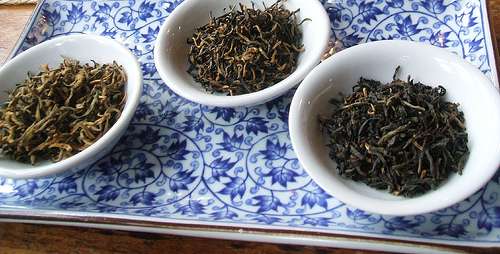