Like most of you, I’ve been following the discussion going on in the specialty tea industry about the political tea party and its impact, if any, on tea’s image.  I had resolved to stay out of it, but the topic (like the tea partiers) just won’t go away.

Most recently, the emergence of a coffee party gave the media a new angle on the tea party, leading reporters to the debate on political tea versus specialty tea.  It went mainstream over the weekend in the form of an Associated Press (AP) story for which my boss, George Jage, World Tea News Publisher and World Tea Expo President, was interviewed.

I was pleased to see that George, as well as other representatives of the specialty tea industry – Teas Etc’s Beth Johnston, Elmwood Inn’s Bruce Richardson, and Samovar’s Jesse Jacobs – remained calm in their remarks.  To me, this is the best way for the specialty beverage business to distinguish itself from the political movement.  In fact, it provided the basis for the platform of the so-called coffee party, which claims to differentiate itself from the tea party by suggesting that cool-headed, reasoned debate should supplant hysterical ranting in the political discourse.

I emphasize this point, because I’ve noticed some hysteria lately among specialty tea professionals over the potential damage political tea partiers are doing to the reputation of the beverage.  I’ve had forwarded to me tweets and e-mails declaring that this movement must be stopped at all costs, even insisting that some industry organization must step in with a formal protest (of the protests, ostensibly).

Really?  Call me crazy or naive, but I don’t see the metaphorical moniker of a radical political movement as being a threat to a hundreds-year-old tradition.

For one thing, as a couple of people in the AP story pointed out, these partiers do not appear to have chosen good tea as their emblem.  Judging from the photos and video footage I’ve seen, the teabags they’re using in protests are pretty cheap – and why wouldn’t they be?  I doubt anybody has post-rally plans to steep a cup with the bag that’s been swinging from his hat all day.

Even if they did, would it matter?  Consider what happened with the French sans-culottes (“without knee-breeches”), radicals representing the disenfranchised masses in the Revolution.  Sure, attention was called to the difference between pedal-pushers and pants, but as far as I know, it didn’t cause everybody to start going naked from the waist down.  Do you think the 18th Century fashion industry fretted over how to put a stop to all the negative press about culottes?

And the sans-culottes weren’t working within the 24-hour news cycle.  When I forwarded the AP story to my father in Roswell, New Mexico, pointing out to him that the company I work for had made it into a story in my hometown newspaper, his response was, “You know things have gotten bad when you have to read the fine print to tell whether they’re talking about a political party or a hot drink.”

So much for being impressed by the Small-Worldness of it all.  But my father, a moderate, mainstream Republican, has a point.  The public is suffering from tea-party fatigue.

In my view, even taking the political coffee party’s stance – that sitting down for a cup of coffee (or in our case, tea) equates with having a civilized conversation – would be a mistake for the specialty tea industry.  The best approach is to completely dissociate “real” tea from the political extremism that most people are uncomfortable with.  And the way to do that is to stay focused on what we do best – make and share products that lead to meaningful experiences.

The Era of the Clipper Ship – Part 2

Tea latte art steps up to the cup

A winter wonderland of tea and chocolate 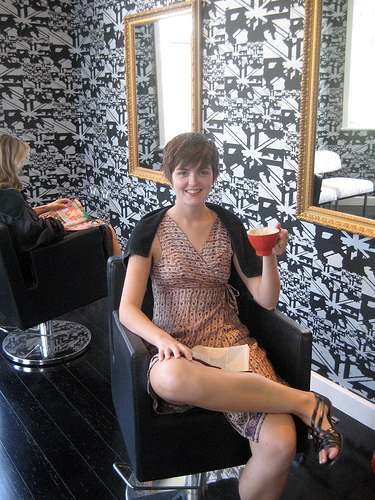 A Bright Future for Tea