Last month I thought I’d take a rest from overeating and drinking with my little diet blog post and that (unexpectedly, I must say) brought on great discussion with my tea industry colleagues.  So this month, I’m actually asking for input.  Just food for thought, intended primarily for tea compatriots – what do we all make of it?

This week, a release hit the tea news wires from the budding U.S. Tea Giant, TeaGschwendner.  Initials no coincidence, huh?  Their website’s even tgtea.com.  The release stated that “loose leaf tea is gradually becoming a way of life for millions of consumers nationwide”.

True – loose-leaf tea is a healthy (pun fully intended) growing niche.  But is it a way of life for most Americans?  No, not yet (I guess Tea G did, quite appropriately, use the qualifier gradually…).

Tea G’s news release also states that “Globally, more than 3 billion cups of tea are consumed every day”.  The Tea Association of the U.S.A. Inc. reported that in 2007, 55 billion servings of tea were drunk by Americans.  Even if we give tea a 15% growth rate (steep, eh?) over the past 2+ years, we Americans would presently be consuming about 75 billion servings annually, about 7% of the tea consumed on the earth today.  Sounds right in line with our share of the world’s population (5%), but not really.  I think we all know that we Americans are out-of-control consumers.  When we compare our per-capita consumption of tea with, for example, water and energy (we consume 6X the world average of each of these), meat and fish (5X), paper (8X), and automobiles (18X), it becomes very clear that tea still has a lot of catching up to do to in the U.S. consumer market*.  No wonder companies like Tea G, Itoen, Unilever, and Tata are cool with wetting their toes in the U.S. waters while consumers gradually get enlightened about tea.

I’ll leave you with an actual solicitation that was posted in a tea forum a few years ago.  It stunned me to read it, because we Americans don’t like to think we’re ever near the bottom of any consumption totem pole…but read on:

“We are Ukrainian Import-Export wholesaler.  In our country we supply military bases, prisons and other Governmental Institutions.  We mostly interested in cheap (low quality) BOP tea, but not CTC tea.  At present we urgently want to buy 18t of black tea (BOP). Place of origin we are particularly interested in is Shri-Lanka or China.  We can accept both bulk or packed.  But we prefer packed into consumer boxes by 100g.  Please send us your offer with FOB price per 1pcs (100g box) or per 1kg.”

Given the Tea Association of the U.S.A.’s statistic that 65 percent of tea brewed in the United States is in tea bags, odds are you are drinking lower-quality tea than a Ukrainian prisoner.  But you’re eating a lot more meat and sugar, scribbling on more paper, and probably driving a cooler car than he is.  Happy sipping! 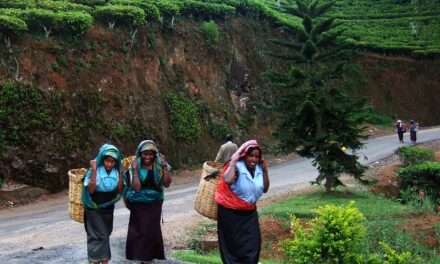 Teas of India – A Word on Those Initials in Tea Names

Does your tea business have passion?