Whereas the point of Chinese tea ceremonies is the tea, it is the ceremony that matters most to the Japanese.  The famous Japanese Tea Ceremony is without doubt the most ritualized way of drinking tea practiced anywhere.  Devotees dedicate their lives to chanoyu and volumes have been written on the

subject.  It is obviously not the same thing as merely drinking tea, but what it is, exactly, is harder to define.

As we have seen, the basic procedures for this tea ceremony were laid down by Sen-no Rikyu, the Buddhist practitioner who modified and refined what was already an ancient tradition with roots in Song dynasty China.  The best Song teas were manufactured in cake form and were prepared by powdering the leaf, which was not steeped but added to hot water and whipped with a bamboo whisk.  Only one cup at a time could be prepared in this way, obviously, and one drank this liquid with the leaf suspended in it, powder and all.  The old-style boiled tea never completely disappeared, of course, and the new whipped tea was restricted to the privileged Song nobility and a favored elite within the Buddhist monasteries.  The ruling class was dispossessed, if not exterminated, as the Mongols under Kublai Khan (1215-1294) completed the conquest of China, and the noble Song tea tradition died with them.  Only in Japan, where it had taken root and the Mongols did not penetrate, has whipped tea been preserved.

The tea ceremony Rikyu codified and taught thus had centuries of aristocratic precedents.  To Japanese warloads and merchant princes, it became a symbol of new wealth and culture, and they vied in acquiring prized antique teawares, paintings, and artifacts associated with tea.  Knowing how to use and display treasures of the kind and mastering the etiquette involved in making and serving tea conferred enormous social prestige, and the Way of Tea was considered a path to spiritual attainment closely associated with the samurai’s preferred form of Buddhism, Zen.  Rikyu learned the art from a disciple of an earlier master, Shuko, who had maintained, “It is not an amusement, nor a technique either, but an enjoyment of enlightened satisfaction.” 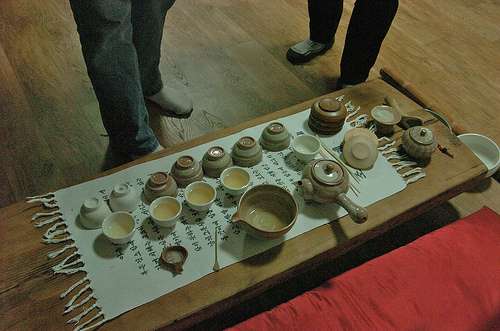 The way of drinking tea

My journey in tea continues…