Honey is nectar of the gods. Why is it that within seconds of opening a jar, every doorknob in your house has a dab of honey on it, and there is an unexplainable sticky spot behind your right elbow? Magical stuff. Over the years, I have had wildflower honey, fruit blossom honey, and fire weed honey. Honey from chestnut blossoms or buckwheat could be found in my pantry at one time or another. In between, there was a jar of clover – good old reliable clover. For half of the seventies, I labored under the notion that honey was Good For You, and I used honey instead of sugar in all the jams, canned fruit, and pickles – scores of jars – I “put up” each harvest season. Honey replaced sugar in all baking.

Honey was purchased in five gallon tins. Then came the Reality Check of the Eighties where I learned that while honey may have nutritional value not found in refined sugar, one’s pancreas sees honey as, well, sugar. And the pancreas has to do the same work to render a tablespoon of honey as a tablespoon of C & H pure cane sugar. This was a painful loss of innocence for me. More painful than Santa Claus and Alice Cooper, combined. After months of grieving, I accepted that I would use sugar where sugar tastes best and honey where honey tastes best. Tough decisions.

Nevertheless, I am a sucker for any exotic honey out there. The honey referenced above, fire weed, may or may not be from the forest wildflower called Fire weed – named both for the color of the blossom and because it is often the first plant to grow and thrive after a forest fire. The honey was very dark brown and viscous, with an after-burn that scalded one’s tonsils, causing nose and eyes to run. Bronchial passages went into spasm. Those bees were getting nectar from habanero peppers? The chestnut honey, another impulse purchase, was everything expected of honey, but not memorable.

I was delighted that Sandy brought me a jar of honey from Glenburn Tea Estate in Darjeeling, India. Glenburn’s honey is made from tea blossoms. That’s right: tea blossoms. It is light amber in color and very light, a consistency more like syrup than honey. The flavor is subtle, but distinct. There is no cloying sweetness. It is excellent on toast, granola, yogurt, and with peanut butter. It is great by the teaspoon, right out of the jar. If I were going to put a dollop of honey in my tea, it would be Glenburn honey.

A love of teaware 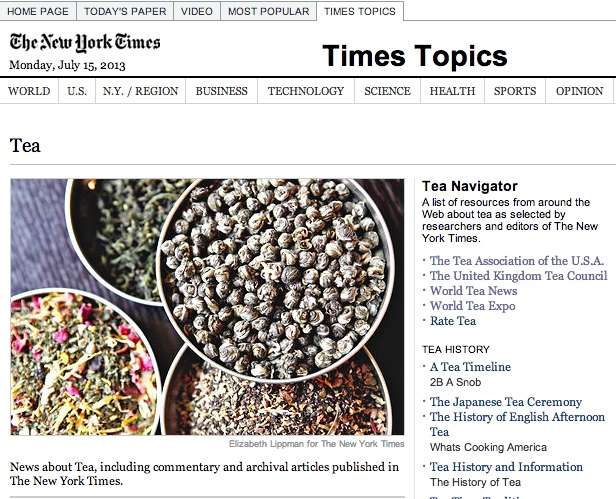 The New York Times does tea!

The perennial question: Which tea is healthiest?