In the Beginning: Tang, Song and Mongol – Part 2

In the confusion after the Tang dynasty collapsed, no fewer than fifteen emperors came and went before a functioning central government was finally restored with the advent of the SongdyÂ­nasty in 960. The post-Tang Chinese knew little about the rest of the world, which they perceived as populated by barbaric races who ought, if the least intelligent, to recognize their Yellow EmÂ­peror as the Son of Heaven and lord of everything under it. MeanÂ­while, they enjoyed undoubtedly the world’s greatest civilization, entirely self-sufficient and supremely self-satisfied.

Despite constantly glancing over their shoulders at the unatÂ­tainable ideals of a departed past, the Song made great advances. By the year 1000 they had invented the smallpox vaccination in medicine, the use of paper money in commerce and of gunpowder in war. It is not surprising, therefore, that they also invented new ways to manufacture tea and new ways to enjoy it. Tang tea lovÂ­ers were accustomed to tea that was compressed into cakes or bricks. To prepare it, the cake was roasted “until soft as a baby’s arm,” Lu Yu advised, and then was broken apart and ground up fine. The tea was now ready for boiling. The Song developed new tea-making procedures, and intime a successor to Lu Yu’s tea book appeared as a guide to the tea ways of this new age. This was the Chalu, or Record of Tea written for the Emperor and court by the illustrious official Cai Xiang (1012-1067).

Cai Xiang begins by trying to distance himself from the Ch’a Ching, “Lu Yu in the Ch’a Ching did not rank the tea of Jian’an….” To point up the superiority of teas like this from Fujian Province is one of the objects of the author, who served as the official responsible for transporting the Fujian Tribute Teas. Whereas the Tang Court had favored teas from Zhejiang, the forty-one Song Tribute Teas all came from Fujian, further down the coast. The Chalu describes newly developed methods of proÂ­cessing tea leaf and of preparing the drink. Instead of boiling the tea, the new way was to whip the tea in hot water using a delicate whisk made from split bamboo. This meant drinking the tea powÂ­dered leaf and all; it also meant tea had to be prepared one cup, or bowl, at a time. With the whisk, the tea bowl thus became the most essential utensil in making tea and bowls of new shapes and colors were developed. Instead of the blue Tang glazes Lu Yu loved, Song ceramicists came up with strangely beautiful black, dark brown and deep purple glazes to set off the more vivid green whipped tea. The Song porcelain manufactory at Jingdezhen in southern Jiangxi Province became China’s most important and centuries later supplied most of the porcelain Europe imported.

Song culture possibly reached its height under the “poet-EmÂ­peror” Huizong (ruled 1100-1126). He had some 20 million litÂ­erate, town-dwelling subjects (out of a population exceeding 100 million) who made up a market for teas from all over the Empire, which they enjoyed everywhere in another Song institution, the teahouse. The leading tea lover of the day was Huizong himself, who wrote a treatise which reveals quite an amazing understandÂ­ing of tea cultivation and manufacture for one who was shielded from anything suggestive of manual labor. His favorite was a white tea “from trees that grow wild on forested cliffs” harvested by four or five families in the Wuyi Mountains “so no more than two or three bagfuls can be gathered each year.” Unfortunately this Son of Heaven, more artist than ruler, also lived to write a famous “Poem of Lament in Exile”:

I still recall the splendors of my jade-like capital,
My home as ruler of those boundless territories,
The Forest of Coral and the Hall of Jade,
The morning levees, the evening music….

After Huizong, painter, poet, connoisseur and husband of 3,912 concubines, Hangzhou, the San Francisco of China, was never again capital of an empire united under the Song. They reÂ­tained control only of the south and in 1270 finally succumbed to Genghis Khan & Sons, whose Mongol hordes had commenced the subjugation of China. Curious, is it not, that Marco Polo, who eventually served the Mongols as governor of Hangzhou, noÂ­where mentions the Song or even tea, which is cultivated all around the city? Some historians assume that, like his Mongol masters, he simply took no notice of the subject people’s daily life. (Others ask, what if he never got to China proper at all?) But all historians agree these same Mongols reduced China’s population by a third and all but destroyed Chinese culture. 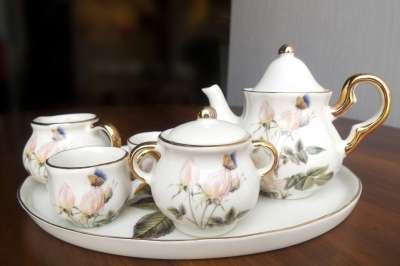